Terrorists were GLA suicide bombers seen during the War against the GLA.

One of the GLA's greatest triumphs was convincing ordinary people of the worthiness of the organisation's cause. Some GLA recruits were willing to sacrifice themselves for the cause by becoming human bombs. These terrorists would strike fear into enemy forces. Cheap to train, terrorists ran at the enemy and detonated as much C4 as they could carry when they got close. Terrorists could also commandeer cars, creating car bombs. 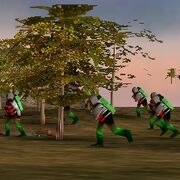 Terrorist during GLA attack on a Chinese nuclear plant

Terrorists were often used alongside other units, providing a distraction for enemy forces, but they were best used in surprise attacks. Even a single terrorist could destroy any faction's basic tank, while fast-moving car bombs could do even more damage. Just two terrorists can easily destroy an Overlord tank.

A particularly devious GLA commander would order Terrorists to commandeer combat cycles and look for a weakness in his opponent's defenses, before delivering a highly explosive shock as their lightning quick speed allowed them to zip past enemies easily, giving their opponents little time to retaliate. Rodall Juhziz and Leang had their combat cycles driven by Terrorists straight out of the arms dealer.

It is critical to use units firing bullets or non-explosive projectiles when attempting to neutralize terrorists, because rockets, cannon shells and flame weaponry would detonate their explosives, damaging all objects in their vicinity anyway. Also, running them over with a vehicle would cause them to detonate their explosive packs beneath its treads. Aircraft such as the Comanche can attack terrorists without fear of any damage.

Terrorists are used extensively in multiplayer, and were ideal for early rush attacks. Due to the fact that a large number of terrorists riding bikes into a base is almost unstoppable, many game hosts choose to make a "No DB" rule, which means "No Demobikes". Their car bomb ability was particularly potent on maps such as Tournament Desert, as such maps had lots of civilian cars eligible for commandeering. As a result, some competitive matches use versions of these maps without cars. 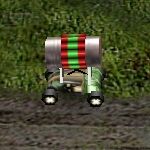 German replacement for the terrorist

The terrorist was replaced with a driving bomb in the censored German releases of Generals and Zero Hour. Apart from the visual appearance, its functionality is exactly the same.

Juhziz' terrorists were supplied with more powerful bombs that made them as deadly as a bomb truck explosion, with increased area of effect. However, they do not detonate when run over by vehicles.

Dr. Thrax's toxin terrorists carry lethal toxins addition onto its dynamite payload. After exploding, they would leave some toxin residue effective against infantry and lighter vehicles.

Leang's combat cycles come with terrorists as default drivers, but they cannot be trained in the barracks. No other changes were made.