Tesla troopers were special advanced anti-armour/anti-infantry infantry used by the Soviets during War of the Three Powers and The Uprising. 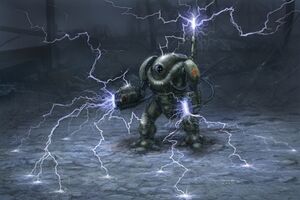 Tesla troopers are the Soviet Union's elite shock troopers. Clad in massive suits of powered armour and armed with integrated Tesla guns, these soldiers are extremely effective against armoured units, since their Tesla guns can cut through most armour, and their bulky battlesuit prevents them from being crushed by tank treads. In addition, their Tesla weapons can be used to power Tesla coils, keeping them operational even when a blackout occurs.

Furthermore, they are equipped with electromagnetic disruptors, allowing them to disable all enemy vehicles within a short radius. However, activating the EM disruptor also renders them immobile and unable to attack.

The Tesla trooper is armed with a pair of Tesla guns built directly into the arms of their armour, which are effective against both infantry and vehicles. However, its slow rate of fire means that it is best used as an anti-tank weapon, as faster vehicles and infantry can simply out run the Tesla troopers. They can also be used as emergency power supply for Tesla coils, in case of power failure.

In addition to the Tesla guns, Tesla Troopers can also project an EM field around themselves, disrupting the internal electronics of all enemy vehicles in its vicinity. However, this field can only be maintained if the Troopers stay stationary, and the Tesla guns cannot be fired when the EM Disruptor is active.

Despite their formidable powered suits, they still possess a few glaring weaknesses. The most notable issue was the overall slowness of the robotic armour, as well as a slow rate of fire. Imperial Shinobi proved a major problem for the troopers, as they can easily outrun them, and their armour offers no protection against their shurikens.

Furthermore, the heavy metallic armour they wear means that they are one of the few infantry units vulnerable to magnetic satellites. Their suits also offer no protection to chemical and cryogenic weapons, and they are defenseless against aircraft.

Also Allied Peacekeepers can outnumber it with relative ease and their riot shields will also be a problem.

For infantry-only players, the Tesla trooper has proven to be an effective rushing the enemy when being paired up with the flak troopers. While Tesla troopers decimate ground units and structures, flak troopers can rip apart enemy air forces. Tesla trooper squads are also an appreciated seasoning for garrisoning a choke point against armour rushes. It is better if a Tesla coil is present as Tesla trooper can power it up. In defending a base from enemy infantry, it is a good idea to make the Tesla Trooper attack the infantry head on, while a squad of conscripts tear apart the infantry from a safe distance. This tactic can cover up the Tesla trooper's poor rate of fire.