Tesla technology is a Soviet electricity-based weapon technology inspired by the inventions of Nikola Tesla.

A Tesla Tower (curiously named a Tesla coil in Red Alert games), for example, was shaped like a Christmas tree with four Tesla coils and a Van de Graaff generator at the top. Electrical arcs from the Tesla coils would travel up the structure and energize the generator, which launched powerful bolts of electricity for a considerable distance, potentially delivering 3 bolts of electricity with a single charge-up, depending on the number of enemies who were present in the area - obviously, additional charges would not be used on already destroyed enemies. Based on the unit's appearance, it seems as if the unit was acting as a giant staggered capacitor which is released by a Maser-activated air ionizer, delivering power in massive surges to the generator ball at the top. Another Maser, more powerful, flash ionizes the air between the top collector and the target, and the simultaneous discharge travels through the air to the target, incinerating it.

Tesla coil: the feared Soviet base defense that cannot be outranged by artillery, save for destroyers and cruisers.

Tesla tank: a half-tracked tank with two Tesla coils and an integrated Van de Graaff generator. Proved as a useful universal unit, but was poorly armoured and had a noticable reload time.

Tesla trooper: the evolution of the Shock Trooper. Its Tesla gun can power Tesla Coils, even turn monuments into makeshift ones, as evidenced below. Could not be crushed by enemy vehicles.

Tesla coil: only slightly redesigned, with its power able to be bolstered by Tesla Troopers. Three Tesla troopers can power a Tesla coil without the need for electricity from the rest of the base.

Eiffel Tower: a team of Tesla Troopers turned this monument into a large Tesla coil with immense range and damage output.

War of the Three Powers and The Uprising[edit | edit source] 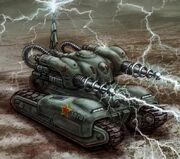 Tesla coil: now able to be built on water and can hit submerged units. In addition to Tesla Troopers, it can be powered by Stingrays and Tesla Tanks.

Tesla trooper: a significantly heavier-armoured version of the old Tesla trooper, unharmed by attack dogs and war bears. Can garrison structures in spite of weight, but has slow rate of fire and is ineffective against massed infantry or aircraft.

Tesla tank: due to unknown events and circumstances, standard Tesla tanks were experimental weapons during the War of the Three Powers and were used exclusively in major battles. They were a campaign-only unit and could only be built in war factories owned by Anatoly Cherdenko.