The End of All Things

The End of All Things is the seventh and final mission of the Nod campaign in Command & Conquer 4: Tiberian Twilight.

After saving Commander Parker from near death, Kane revealed to Parker that he was now ready to execute the final stage of his plan. While Lillian Parker, now fully resuscitated, pleaded with Parker not to continue to follow Kane in his condition, ultimately Commander Parker would agree to execute the final stages of Kane's plan. Kane's goal was to finally activate Threshold 19 by using nearby TCN control nodes to align the entire network. Parker was to oversee this operation, as the entire GDI military including General Wesley Riggs had disobeyed political leader Evelyn Rios and now planned to fight to the death to prevent Kane from activating the Threshold tower.

Parker, as well as two other Nod commanders, deployed their Crawlers at the base of Threshold 19 which was already in the midst of a large battle. The Nod forces quickly captured half of the six TCN nodes in the vicinity of the tower, and Parker quickly moved to wrestle more nodes out of GDI hands. With the majority of the nodes under Nod control, Nod technicians were able to override GDI's control and aligned the Tiberium Control Network with Threshold 19.

Despite the alignment, GDI's military made one last attempt to take back the Tiberium Control Network. Col. Louise James sent in the Arcus bomber, a massive, heavily-armed experimental bomber already being tested in the area. The Arcus quickly dispatched the two other Nod crawlers without any resistance, leaving only Parker's forces to battle the experimental craft. As it roamed the battlefield attacking Parker's forces, the bomber also landed near TCN nodes to capture them for GDI and to deploy infantry from orbital drop pods to maintain control. After taking significant damage, the Arcus would also utilize powerful particle beams and rockets against Parker's forces. Ultimately, however, the Arcus was destroyed, claiming the Tiberium Control Network and Threshold 19 for Kane.

Aftermath and End of the Fourth Tiberium War[edit | edit source] 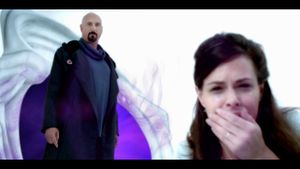 Parker proceeded to enter Threshold 19 with Kane, as Parker's optical implants were necessary to finally activate the tower, ultimately achieving Ascension. Despite Lillian Parker's pleading not to finish Kane's plan, Parker stuck with the Prophet and activated Threshold 19's portal. However, as he did so, Col. Louise James, believing that Parker was Kane, shot the Commander, fatally wounding him. Before being able to finish him, the real Kane appeared and strangled James as Parker's view faded.

Some time later, Parker awakened to his wife crying and Kane's presence. Kane, calling the commander, as well the human race, "so fragile," entered the portal and vanished, achieving his generations-old goal of Ascension, leaving Parker to die mere seconds later.

But Parker's sacrifice, in the end, was not in vain.