The Harder They Fall

The Harder They Fall is the third mission in the Nod campaign of Command & Conquer 4: Tiberian Twilight.

Despite the support of the current GDI government under Evelyn Rios, much of the GDI military, under the command of Col. Louise James, consistently refused to cooperate with Nod. Forces loyal to James put up heavy resistance in the defense of the Pacific TCN Hub in Guam, and Kane was greatly angered by James' constant refusal to back down. Receiving information that her ship, the GST Tzadik, will soon be flying low above the Forgotten Tin City, Kane ordered Commander Parker to enter Tin City, clear out all resistance, and bring down the Tzadik.

Parker was initially hesitant about battling against his former commanding officer but Kane persuaded him otherwise, showing Parker his wife alive and recuperating on screen after Gideon's attack on New Adana.

Parker's forces arrived with roughly twelve minutes until the arrival of the Tzadik. Using this time, Parker began to clear out GDI forces and capture anti-air turrets that could be turned against the Tzadik and its defenses. GDI had a total of three Defense MCVs stationed throughout Tin City, many of which were destroyed by Parker

Soon, the GST Tzadik arrived, accompanied by several Hurricanes and Orcas for protection. In addition, James deployed an Offense MCV to counter Parker's forces. However, Parker attacked James' defenses, destroying at least all accompanying aircraft and directly firing at the Tzadik. After taking numerous hits, the Tzadik, now at 7% hull integrity, gave out and fell down to the earth, crash-landing deep in Forgotten territory. If the GST escapes then fails the mission.

With the Tzadik downed, Kane believed that James had been permanently removed from the war. However, he was barely able to savor the victory, as he soon learned that Gideon had killed Dr. Johann Pascal, making Commander Parker the last remaining Implant and Kane's last hope for ascension. To guarantee Parker's safety, Kane had him sedated, and reconstructive surgery (presumably) was performed to make Parker an exact replica of Kane. 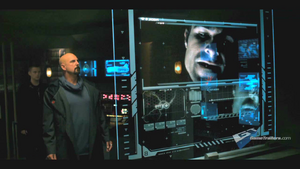 Kane and Commander Parker witness Dr. Pascal's final moments as he is tortured and brutally murdered by Gideon.

Unfortunately for Kane, however, the Tzadik was disabled but not destroyed. Col. James would go on to repair the ship and rejoin the fight rather quickly, starting an insurrection against the GDI government and later returning to being a thorn in Kane's side.