Idris is the Qur'anic spelling of Enoch, who was chosen by God for ascension to heaven. According to certain strains of Kabalistic mysticism, he later became Metatron, the voice of God...

The Idris Corporation began its life as GDI's internal "public works" division, responsible for much of the work maintaining and establishing Blue Zones in the pre-Tiberium War 3 era. In the aftermath of the GDI Council formalizing their alliance with Kane, this division was tasked with the construction and maintenance of the Nod leader's putative Tiberium Control Network and began to expand rapidly.

The following year, faced with escalating Nod/GDI infighting as to the project’s direction, the council voted to spin off the division into an independent corporation, to be lead by an experienced, politically neutral figure – one Elias Caruso.

Caruso was a well respected private developer best known to the public for playing a major role in the massive but ultimately doomed post-Tiberium War 3 reconstruction effort. Having watched in horror as the rapidly expanding Northern European Tiberium field consumed his "model city" of New Eden in 2052, Caruso came to believe above all else that the control and eradication of the alien crystal was essential to the continued existence of humanity. More than his vast resources or technical expertise, it was this vision, this all consuming passion, that convinced the council that Caruso was the man for the job.

Despite some initial consternation amongst the media regarding Caruso’s ability to bring such a massive project to bear, he quickly won them over with a series of bold, dramatic moves – notably hiring controversial teenage science prodigy Dr. Johann Pascal as a key advisor to the project... 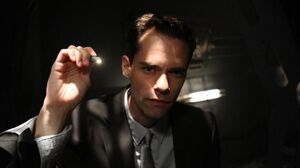 ...and, after weathering a series of attacks from so-called "Nod Separatists", the construction effort proceeded in an efficient, orderly manner. By 2064, the CEO had gained significant support amongst both the government and the general populace, a large percentage of whom he employed.

As the first phase of the TCN neared completion, leaving vast swathes of wasteland Tiberium free but far from habitable, Caruso expanded Idris' purview to include "environmental re-imagination"– a process more commonly known as terraforming. 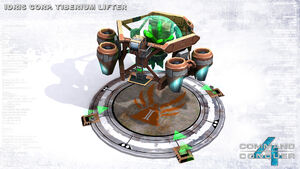 Empowered by the TCN’s ability to manipulate vast swathes of the Earth’s surface, the corporation began replacing the planet’s devastated post-Tiberium landscape with a variety of entirely man-made, faux natural environments, each an idealized take on the pre-Tiberium Earth.

While critics have decried Idris' "eerily clinical" design aesthetic, with its emphasis on spatially organized, heavily art-directed spaces, and environmental groups have criticized the corporation for simply "pasting over" the Tiberium blasted wastelands, it is inarguable that the end result has been anything but well received by the world’s surviving populace. 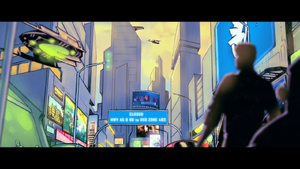 New Blue Zones as depicted in the C&C Motion Comic

Sadly, Caruso, already debilitated by a series of strokes in the early 2070’s, did not live to receive that adulation, dying from a brain aneurism in 2074.

Despite this crushing blow, the Idris Corporation held the course under the guidance of their former CEO Evelyn Rios, with Dr. Pascal in place as the conservator of Caruso’s vision. The company’s ongoing success has given Idris significant political clout with both GDI and Nod, leading to Rios’ recent election as the General Secretary of the GDI Council. Today, Rios works from her new position to aid Pascal and the entire Idris group as they press forward in hopes of fulfilling the dream of their founder - to truly free humanity from the clutches of Tiberium.