The Scrin Thresholds are enormous superstructures constructed by the Scrin at nineteen Tiberium-rich locations across the Earth. All but one of these towers were destroyed by GDI at the end of the Third Tiberium War.

The Thresholds are apparently gateways, primarily used to extract large quantities of Ichor (Tiberium) in the immediate area and process them to Ichor Hub, as said in the Scrin intelligence database, although it is presumably also used as a gateway for Scrin units to transport through via the link to the Hub (this apparently worked both ways; Foreman 371 used a tower to escape Earth on his Mothership, warping to the Hub). 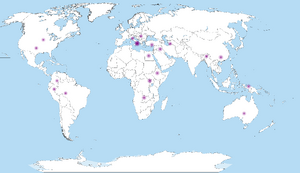 A map of the nineteen Threshold locations, with the largest dot being Threshold 19

The Scrin created the Thresholds while GDI forces were distracted by Scrin attacks on civilian targets. The Thresholds were well protected, each having three Phase Generators warping them out of sync with the physical plane of reality; rendering them completely indestructible.

Nod followed a plan to use the Threshold technology. Its forces captured a Nerve Center in Italy, gaining the codes necessary to use the Scrin Thresholds.

The GDI Commander successfully destroyed a Threshold near Rome, first by destroying its Phase Generators, rendering them vulnerable to physical attack. GDI then went on to destroy eighteen out of the nineteen towers. Nod's Commander was sent to what used to be the Mediterranean Coast. He successfully managed to stop GDI's attempts to destroy the last tower in southern Italy, while the Scrin hastily completed it, leaving Foreman 371 but one choice - EVAC to Ichor Hub.

The final tower was protected with extreme ferocity by one of Nod's highest-ranking commanders, believed to be Kane's second in command. This Commander destroyed all GDI presence in the region. As such, the tower phased out of sync with the physical world when it was completed, and now stands impervious to human attack and natural upheavals and is under close Nod supervision, believed to be acting under Kane's personal orders.

With the Relay Node destroyed, it seems unlikely that the Scrin will use the remaining tower, located in Italy, for anything at all, at least in the near future. Nod is apparently keeping a low profile, despite their tower being invulnerable, and GDI scientists believing that the tower is completely inert.

Years have passed since then during the closing wars of the Tiberium age, the Incursion War and the Ascension Conflict. Kane would later use his Tiberium Control Network, aided by Commander Parker's Tacitus-based optical implants, to activate Threshold 19's portal within the alien megastructure. He and hundreds of Nod followers would depart Earth (possibly achieving Ascension after so long) through the activated Threshold, erupting into a spectacle going beyond the wildest LASER lightshows.

There are two main uses of these towers. Number 1: massive Ichor extraction. Number 2: transdimensional portal. Theoretical rumours are circulating that these towers are to be used to phase a full invasion force from Ichor Hub to Earth, rumoured to be worse than the extraction force disintegrated at the Battle of Ground Zero, allowing them to have domination over Earth's population as per the Overlord's orders. At the conclusion of the Ascension Conflict, however, these rumours are yet to be confirmed, let alone visual contact with any Scrin unit in the battlefield.

In Global Conquest, constructing 9 Threshold Towers is an alternate victory condition for the Scrin. Besides its importance for victory, a Threshold Tower grants access to the Wormhole and Phase Field support powers, but only accessible in the global map.