Threshold 19 (known as "Kane's Tower" among Nod's faithful) is a Threshold constructed by the Scrin during their invasion in the Third Tiberium War.

Located in southern Italy on the Mediterranean coast, it is the last such Tower (out of the original nineteen) still standing at the end of the Third Tiberium War, and is currently under the control of the Brotherhood of Nod.

In the closing days of the War, Threshold 19 was one of the only four Threshold Towers still existing and the one closest to completion. The rest had been destroyed by GDI. Nod's leader Kane instructed the Brotherhood's best surviving general to protect Threshold 19 from GDI assault at all cost, so that the Tower may be completed and used for Nod's advancement. Meanwhile, Foreman 371 of the Scrin hastily evacuated from Earth via the Tower. The Battle for Kane's Tower ended with Nod successfully repelling the GDI offensive while the Scrin finished its construction.

Following the death of all Scrin combat units after the Battle of Ground Zero, GDI believed Threshold 19 to be completely inert. Unbeknown to them, Nod has taken control of the Tower and are busy discovering its secrets. The completed Threshold now stands invulnerable to Earth weapons.

During the interbellum years, when Kane personally approached GDI for an alliance to counter the rapid spread of Tiberium, a Tiberium Control Network was constructed. Unbeknownst to anybody but Kane and Dr. Johann Pascal, the TCN was linked to Threshold 19 to activate a portal to unknown worlds. Five people were implanted with optical implants to activate the Tower's gateway once the TCN becomes online. GDI Colonel Louise James discovered this in 2077 as the Ascension Conflict was underway, although she believed that Kane was attempting to bring back the Scrin. Nod Separatist leader Gideon also discovered this, and proceeded to kill the five implant holders, knowing full well that they were vital to Kane's ultimate plan. 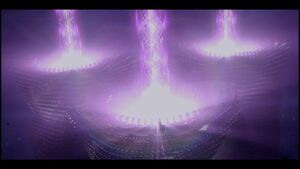 Threshold 19 activated at the end of the Ascension Conflict

Towards the end of the Ascension Conflict, Threshold 19 once again became a battleground between the Nod and rogue GDI forces. Although GDI gained a foothold on one side of the tower, Kane successfully linked the TCN and Threshold 19 with the aid of commander Parker, who had an optical implant based on Tacitus technology, who died soon after. As a result of the link, a portal formed in the Tower through which Kane and the rest of Nod ascended to an unknown location.