Threshold 19 is the final mission in the Scrin campaign of Tiberium Wars.

The Scrin invasion met with initial success and they began erecting the Threshold towers. They soon discovered human resistance to be far above what the harvesting force could handle. Once the initial surprise wore off GDI counter-attacks began containing and pushing back the invaders.

The Scrin reaction to the turning tide was hampered by disagreements within their command. The Overlord, through its underling the Supervisor, ordered Foreman 371 to continue investigating Kane, while the Foreman's artificial intelligence assistant insisted that a Threshold be completed first, so as to provide a method of escaping the planet. The crisis came to a head as the incomplete Threshold assemblies came under GDI attack. Without an operational tower, the Scrin would be stranded in the Solar system, and the Foreman would die without access to a vital Tiberium infusion. The AI and the Foreman ultimately disobeyed their orders and focused on defending Threshold 19, the tower nearest to completion.

Kane too sought the construction of a tower to fulfill his plans and ordered Nod to aid the Scrin in their defense. A trusted field commander was dispatched to see it done.

The situation became critical for both Scrin and Nod as the incomplete Threshold 19 became the last tower standing. If the tower could be completed it would become invulnerable to all further attack.

While Nod fought to protect the tower on one side, Foreman 371 defended the Threshold from the north-east, and intended to evacuate his Mothership from there. The Foreman had been granted access to advanced vehicles and technologies for this occasion, allowing him use of Storm Columns, Planetary Assault Carriers, and Annihilator Tripods. Setting up two bases connected with wormhole portals, the Foreman needed to hold out for a fixed amount of time, while GDI assaulted both bases with full force. The Mothership AI also told him that Threshold 18 had been destroyed, leaving Threshold 19 to be the last tower standing. 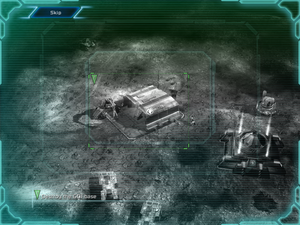 Despite vicious GDI attacks, the Tower's construction was finished. In order to escape, the Foreman constructed the Signal Transmitter to summon the Mothership to the Tower. Before heading to the tower the Mothership was escorted by Devastator Warships and Planetary Assault Carriers to decimate the GDI base, and give it enough time to reach the Tower without enemy interference. With a single shot, the Mothership destroyed the Construction Yard and destroyed all other GDI structures and units in a chain reaction. With the GDI base gone, the Mothership had no trouble reaching the Threshold and escaping Earth just in time, as GDI destroyed the Relay Node at Ground Zero.

After completion of the retreat, GDI forces went back to the tower's site, in hopes of destroying it with new forces. They found out that the tower is now indestructible, and cannot be damaged by any Earth weapons. However, scientists ensured General Granger that the last tower is completely inert. At the same time, the vast Tiberium knowledge and high technology of the Scrin are now in the hands of Nod. Meanwhile, Foreman 371 headed to the Ichor Hub, against the Supervisor's orders. Nonetheless, The Overlord ordered a full-scale invasion, assuring that Earth will fall...