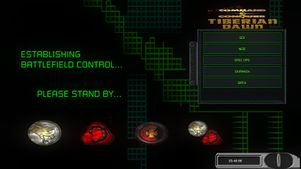 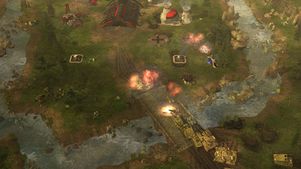 Remember the original Command & Conquer? Remember all the units, characters and themes from the original C&C game? Remember the gritty feeling of RTS Warfare? Remember Tiberium? Well, that classic game from the early 90's that spawned over a dozen titles and revolutionized the RTS Gaming World has been reincarnated in the C&C Generals Zero Hour SAGE 3D Game engine and looks better than ever!

All the classic units and themes are back with changes and improvements over their originals, and one of the best video game soundtracks blasts in the background once again! And if that was not enough, the full motion videos of the mission briefings are here and the intense story campaigns are back and are looking better than ever with over 30 playable missions in total! But once that is finished, you can dish it out in a skirmish or multiplayer game to your hearts content with the all new skirmish AI developed exclusively for this Mod!

This Mod also explores the "special" units and features that the first Command & Conquer shown in the cinematics, but not in detail in-game. This includes the evolution of the subfactions spawned from GDI and Nod with experimental units and weapons that were being developed after the great battle where Kane was presumed dead.

This Mod has pioneered and has even crossed over several landmarks to C&C Generals Modding. This is the first publicly released Mod to exclusively feature a fully functional Construction Yard System to all sides. The original concept was taken from another Total Conversion Mod called C&C All Stars which had a partial system implemented but it was not included for all its factions for various gameplay reasons that would defeat the Mods original design. When the development teams between these two mods collaborated for a brief time the C&C Tiberian Dawn Redux team managed to produce an "improved" design from the Construction Yard System C&C All Stars initially pioneered.

C&C Tiberian Dawn Redux has also brought several graphical revolutions to C&C Generals by improving upon 3rd party Pixel Shader 2.0 Modifications from Boris Vorontsov's ENB Shader 2.0 Mod series. However, the Development Team had later encountered frame rate issues and instability with the Mod so they managed to create an alternate graphical system from the lessons learned from experimenting with the ENB Series Mods.

The Development Team took inspiration from Command & Conquer 3 Tiberium Wars (released in March 2007) to further improve on the graphics of what would be an outdated 5 year old game engine on C&C Generals Zero Hour. The idea to transfer the Mod to Command & Conquer 3 was brought up but that idea was scrapped for various reasons within the Development Team. The Development Team instead embraced the challenge of recreating the original Command & Conquer while providing a deep renovation to the game engine that their Mod was currently using. In doing so they created many additional items not native to the C&C Generals Game Engine such as growing Tiberium that can even poison infantry, bumped mapped terrain, enhanced water shaders, and beautiful renders of environmental fog and lighting which helped create an atmosphere that has been quoted to rival C&C 3 Tiberium Wars on many levels.

The development team also made a meticulious effort in order to make several revisions to their in-game models & textures inorder to make them as authentic as possible to the original game renders while maintaining some "designer freedoms". Even the user interface was modified to complement these changes. Plans were put forward and experiements were made to completely replace the bottom bar with the traditional sidebar that the original C&C is known for, but skill and time constraints have hampered that effort for the Development Team. Another effort that was made prior to their latest release was meant as a shoutout to Command & Conquer Tiberian Sun (released in August 1999) and that was the creation of Tiberium Spawned Monsters known as Visceroids and Veinhole Monsters that can damage vehicles and buildings. According to the Development Team there has even been talk about including Ion Storms that are also known from C&C Tiberian Sun, but those plans had never left the concept stages.

As of September 2017 the Mod has released the final set of campaign missions with patch version 1.44, the campaign videos have also been cleaned up and enlarged to a higher pixel format for HD monitors along with adding a new intro and the progression overview maps in-between missions.