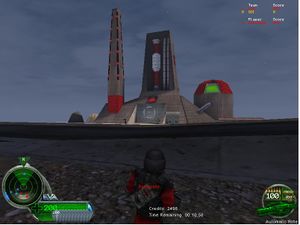 A Tiberium refinery is a facility that refines harvested Tiberium and extracts the raw material from the crystals for processing and later manufacturing of vehicles and weapons for infantry. The process is hazardous to humans, and only qualified workers wearing HazMat suits are permitted in the facility. Their design evolved gradually between the wars, but it always retained its role.

The crucial element of a refinery is a harvester, which collects the tiberium crystals by simply ripping them from the ground and later delivers their load to the refinery, unloaded via a specially designed dock.

In the First Tiberium War, the Tiberium refining process began with the dumping of the harvested raw Tiberium into the refinery. The harvest would be transferred to a special centrifuge, where the minerals would be extracted alongside other useful materials, creating a thick, clay-like sludge that was transferred afterwards to the melting furnaces, where it would be molded into elegant bricks, preparing a clean, safe product for further use in construction yards, war factories and other manufacturing centers. Waste and other byproducts would then be stored in barrels and stacked for removal from the refinery or, in Nod's case, use in chemical sprayers. Quite ingenious.

The situation changed dramatically after the Second Tiberium War, when Tiberium was transformed in the wake of Tacitus decontamination procedures. Now, the refineries melt the crystals as their first step in processing it into a safe, usable resource.

Refineries have poor armor and lackluster structural integrity, yet are vital in the collection process of Tiberium, making them a vital target of enemy forces. However, the fact that they are often constructed within a base makes them difficult to attack directly. Construction of refinery structure itself is considered cheap as it is established with a tiberium harvester (with the cost of the unit only slighly differ). By the time of the Third Tiberium War the Refineries are often targets to many of Nod's Catalyst Missiles with the Scrin Refineries able store a practically infinite amount of Tiberium. Also Ravagers pose a threat to it along with Engineers. Engineers capture the building with the Harvester parked there will also own the harvester. Also when any refinery is destroyed, it spawns a small patch of green Tiberium crystals on its former location which becomes a slight nuisance when attempting to build another refinery or structure there. In addition, any credits stored in the destroyed Refinery will be lost also. The Refinery is not seen in the Fourth Tiberium War due to the existence of Tiberium Control Node which directly absorb Tiberium and process it into usefull material (beside energy). This and new resource system (discouraging monetary related acquisition) ensure the bane of Refinery. Scattered Tiberium may be transferred to Crawler for upgrade point (the Tiberium processing technology has reach such a level that a Tiberium can be used directly into existing war machine rather than for monetary value).