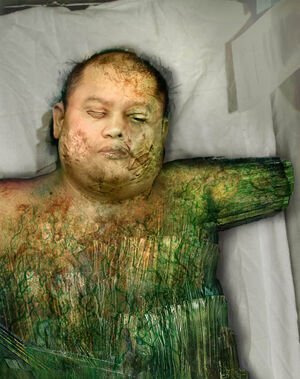 Tiberium poisoning (Tiberium Toxemia) is a medical condition on humans which occurred due to contact with or exposure to Tiberium, which can lead to death.

Exposure to Tiberium is dangerous to all carbon-based lifeforms, including humans. A human may be poisoned by contact with Tiberium crystals, for instances while handling crystals or walking through areas with high Tiberium concentration unprotected, as well as from breathing fumes produced by crystals or fine Tiberium particles present in the air.

The effect of Tiberium on humans is still not yet fully understood. Common symptoms of Tiberium poisoning includes breathing difficulties, suppressed immune system and Tiberium crystal growth on the skin. Long-term low-level exposure to Tiberium causes illness in all terrestrial lifeforms. Victims of this form of exposure (very common among civilian populations in many Yellow Zone areas) suffers gradual decline over many months or years before finally dying due to organ failure.

Exposure to any high-concentration of Tiberium will almost guarantee death within a matter of minutes by Tiberium poisoning. If a human comes into direct contact with Tiberium, the green matter will start to fuse with their skin within about 20 seconds. An intense burning sensation will be felt. If this is not treated, a full infection will soon manifest. The body will soon begin to crystallize, and the victim will die from total system failure.

Breathing in Tiberium particles can be just as deadly. The crystal will become embedded in the lungs, which will slowly crystallize.

Tiberium Toxemia does not always kill its victims. Often, the affected human will instead mutate. Short-term exposure to very high concentration of Tiberium can transform a human into a monstrous creature known as a Visceroid. These amoeboid lifeforms feed on Tiberium and are known to attack and devour humans.

More common are incidents of humans adapting to Tiberium and becoming Mutants. These mutations are subtle and gradual (but very quick in evolutionary terms). Tiberium humans or mutants are characterised by the growth of Tiberium crystals on their body, enhanced strength or senses, resistance and eventual immunity to Tiberium poisoning, and even the ability to regenerate their cells in the presence of Tiberium.

Mutants are generally shunned and treated as outcasts by the rest of society. Some retreated into inhospitable areas in the Yellow Zones and Red Zones, where mutants can survive in the presence of high concentration of Tiberium. Many joined Mutant organizations, of which the Forgotten is the most well known.

The potential of these mutations has been much explored by Nod, whose doctrine called for the "divination" of the human race through Tiberium. Nod believed Tiberium is the next step in human evolution. Project ReGenesis and subsequent research programs conducted by Nod attempted to create supersoldiers enhanced by Tiberium, with varying success.