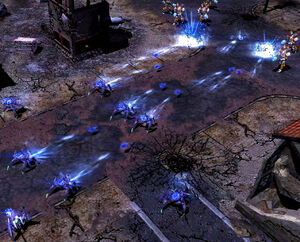 The Ravager is armed with shards

Tiberium shards are essentially weaponised fragments of the alien crystal. Shards are generally highly effective against soft targets, such as humans, who are harmed both from the wounds, and the toxic and mutagenic nature of Tiberium.

Nod has experimented with shard weaponry, as seen in the Tiberium flechette gun that Nick "Havoc" Parker confiscated during the First Tiberium War.

The Tiberium Fiend, a mutated animal prevalent during the Second Tiberium War, was also capable of flinging Tiberium shards. These beasts were generally hostile towards humans, but would not attack the Forgotten.

The Scrin used weaponized Tiberium shards as well; the elite Ravagers use these, along with the Mechapede (whilst upgraded with them), the Seeker (with the Shard launchers upgrade), and the Shard Walker of Reaper-17. Green Tiberium is more commonly used, as it is more plentiful and expendable, but shard launchers can be upgraded to utilize more damaging blue Tiberium.