Time travel is the concept of moving backwards or forwards to different periods of time. It was largely used in science fiction, and until recently, was thought to be considered impossible.

It was the cause for frequent alterations in mankind's future, resulting in much more devastating wars each time it was used as a way to simply make life better for an individual.

Albert Einstein in the original Chronosphere

Albert Einstein was rumored to have been working on time travel technology in Trinity, New Mexico. Researching temporal manipulation via the top secret Philadelphia Experiment, Einstein sought a way to undo the horrible atrocities caused by Adolf Hitler's Third Reich and, by extension, World War II. After much deliberation, Einstein determined that eliminating Hitler's existence at Landsburg, Germany in 1924 (the year that the future dictator was released from the prison in which he wrote Mein Kampf) would erase all timeline threads of Nazi Germany from existence.

It wasn't until 1946, one year after the war's end, that Einstein completed his Time Machine. Deciding to use the device personally, Einstein travelled back to the moment of Hitler's release and eliminated him from space and time with a paradox-inducing handshake. When Einstein returned to 1946, he found that his plan had apparently succeeded; a new timeline had been born in which Nazi Germany never arose, millions who were once dead still lived, and WWII had never happened.

Einstein's manipulation of time had come with serious consequences. While WWII as he had known it had been stopped, a newer and even more devastating conflict was already brewing in the new 1946. With no Nazi Germany to assault its borders, Soviet Russia had grown into a superpower and Premier Joseph Stalin had set his sights on conquering Europe and assimilating it into his nation. To make matters worse, the United States had not yet achieved its superpower status from the original timeline, leaving it mired in the mindset of isolationism. Europe, for the most part, would have to fend for itself against the coming Red tide.

By the end of 1946 a new iteration of WWII had begun, one that would last until 1953 and, in the process, prove even more bloody then the original version of the conflict, with advanced technology like nuclear missiles and Nikola Tesla-designed weaponry leading the fray.

Fortunately for the free world, the war ended in victory for Allied Europe. Due to a devastated Europe and crushed Soviet union the United States emerged from its isolationist shell becoming a superpower once again. Nevertheless, for all his careful planning, Einstein's plan had failed. Instead of stopping the catastrophe of the second world war, he had only managed to delay it and make it even more horrible.

Time travel did not play a part in the first iteration of Third World War, other than the fact that it spawned from the previous conflict. Einstein, now much older and heavily afflicted with senility, had abandoned all faith in temporal manipulation leading to the betterment of mankind, dismantling his original time machine and destroying its blueprints in the process. He still worked diligently on the Chronosphere however, using his Black Forest lab to improve it and other advanced Allied weapons to beat back the Soviet horde once more.

At the start of the Psychic Dominator Disaster, most of the world had fallen under the control of the mind controlling madman known as Yuri. Seeing no other way to save mankind, Einstein reluctantly converted a Chronosphere located in San Francisco into a make-shift time machine, teleporting an Allied strike force, led by Tanya, back to the beginning of WWIII in order to warn the US government of Yuri's plans. This, in effect, forced the Allies to fight the war all over again.

After Yuri's defeat and imprisonment, the new Third World War timeline merged with the old, creating a new, stable timestream. This marked the first and only time that time travel ever had its full desired effect; not only was Yuri's conquest of the world completely prevented, but the new version of the war was markably less bloody than the original, with many lives, including General Carville's, being restored. 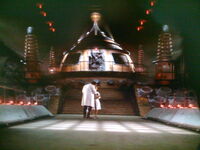 After Third World War, the Soviet Union entered a stagnating, downward economic spiral that, by the 1980s, pushed the once great superpower to the brink of total collapse. With the nation's Premier in hiding and anarchy running rampant, Soviet officier Anatoly Cherdenko decided to take matters into his own hands.

While leading his comrade General Krukov to a secret base beneath the Kremlin, Cherdenko explained that he had long been in charge of a top secret project, one that was meant as a weapon of last resort should the USSR ever find itself at death's door. This weapon was revealed to be a fully functional time machine, one designed and built by Soviet genius Dr. Gregor Zelinsky. After bullying the reluctant and fretful Zelinsky into using the device, Cherdenko sent himself, Krukov, and the Dr. back in time to Brussels, Belgium in 1927, where the trio quickly found a young Albert Einstein. Using the same technique Einstein had applied to Hitler, Cherdenko shook Einstein's hand and erased him from history, effectively re-writing the time stream once more.

When Cherdenko and company returned to their native time, they found themselves in a strong and budding Soviet Union, one that was only a few steps away from conquering Europe. Even better, the new version of the United States was still isolationist, leaving the European forces to face the USSR on their own.

But the new timestream also came with a dark new threat. Since Einstein never existed, nuclear weapons do not exist. This created new Asian superpower called the Empire of the Rising Sun which had launched an invasion into the heart of the motherland, an event which kick started the War of the Three Powers. With the US coming out of isolationism thanks to their new President, both the USSR and the Empire found themselves overpowered and defeated by war's end, with the Empire's Emperor slain in battle and Cherdenko and Krukov placed into cryogenic prison for crimes against humanity.

Once again, time travel failed to stop events from occurring; instead of stopping the fall of the USSR, Zelinsky's time machine had only delayed it and changed the circumstances in which it happened.

For most of all manking, if not for all, "Time is something Man has no godly right to tamper with".

Additionally. Tanya used her Time Belt, a portable teleport device rumored to be reverse-engineered from Chronosphere technology, can also help her escape from danger.

In the Imperial Campaign, with Emperor Yoshiro realizing that, should Chrono technology continues to be used, there can be no Divine Destiny and all the Empire have done so far in the War are for naught, the Imperial military and the Shogun Executioner destroyed the Time Machine in order to fulfill the Divine Destiny without temporal manipulation (Operation: Crumble Kremlin Crumble).

There has been rumors that, in the Command & Conquer: Red Alert 3: Uprising, Futuretech is thinking of constructing a time machine from Chronosphere technology. The rumors were actually true and they developed the Sigma Harmonizer - something that will lead to the end of the known Soviet Union, and that was obviously one thing the Soviet Underground absolutely could not allow to come to pass: they launched a full scale assault on Sigma Island. Despite many complications and a fierce fight, they destroyed the Sigma Harmonizer and secured not only the survival of the USSR, but also of the entire world.