To Tame a Living God

To Tame a Living God is the seventh Soviet mission in Command & Conquer: Red Alert 3. In this mission, the Soviet Commander and Nikolai Moskvin are tasked with the assassination of Emperor Yoshiro, the leader of the Empire of the Rising Sun.

Prior to the start of the operation, Soviet Premier Cherdenko personally promoted the Soviet Commander to Marshal of the Soviet Union. This promotion followed an apparent assassination on the Premier, and the death of accused traitor, General Nikolai Krukov. The Allies in turn didn't know that the Soviets indeedly abandoned them at the harbour of Japan's capital during an attack on every naval base of Naomi Shirada.

As of the transmission, the Soviet Union was back on the offensive, and had regained control over much of the territory lost to the Empire of the Rising Sun's initial invasions. Only a few territories facing the Pacific had yet to be freed from Imperial control. However, instead of evicting the last of the Empire's forces from Soviet soil, Premier Cherdenko ordered the newly promoted Marshal of the Soviet Union to lead an attack on the Japanese mainland. Instead of preparing for a lengthy invasion on all of the Empire's territories, the Premier ordered him to attack the Imperial Palace at the base of Mt. Fuji and to assassinate the Empire's leader: Emperor Yoshiro.

It was hoped, that with his death, the Imperial government would be decapitated and thrown into chaos, resulting in the collapse of the Empire of the Rising Sun's will to fight. This would knock the Empire out of the war, allowing the USSR to focus all its resources on crushing the Allies once again.

Shortly after the Premier's briefing, Dr. Gregor Zelinsky contacted the new General, and attempted to tell him the truth - that this reality was caused by Soviet intervention in the space-time continuum, the Empire of the Rising Sun never existed in the previous reality, and that Cherdenko was not to become Premier of the Soviet Union. The Soviet scientist's tirade may have easily come off as the ravings of a madman, but the doctor stressed that he is in great danger, and that the General is the only one that can show the people the truth.

Meanwhile, the Imperial forces have been fortifying the defense of the Imperial Palace in case of an enemy attack, knowing that should the Emperor be killed, it would sound a death knell for the Empire of the Rising Sun.

A huge armada of Badgers, modified as paradrop transports for this operation's purpose, started the operation as it paradropped Soviet infantry on the Imperial Palace at Mount Fuji, but almost all of them were eliminated by superior Imperial AA defenses. 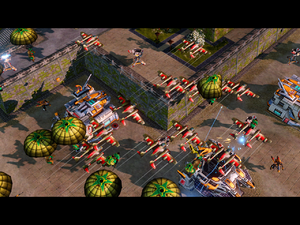 The invasion force being shot down

A Conscript and a War Bear, forced to go solo after the paradrop was nearly blown to pieces, had to sneak past Imperial Warriors and Nanocore guards in their bid to find and assassinate the Emperor. Fortunately for them, the Imperial Warriors were so bored of their jobs, and the Conscript took this to his advantage to create a distraction via shooting at an explosive barrel.

The Conscript, after creating the distraction, then heads to the garden to assassinate Emperor Yoshiro- which, unfortunately, turned out to be an android decoy - he and the bear were taken prisoners for their botched-up attempt on his life.

The distraction, according to Dasha, allowed Soviet MCVs to land near the Palace, leading to the introduction of the ever-dreaded Apocalypse Tanks that had arrived to lead the imminent Soviet assault.

Psi commando Yuriko, the Empire's potential bioweapon was seen several times and put up a memorably good fight against the USSR - but was ultimately killed.

More Tsunami Tanks and Mecha Tengus attempted to join up with the King Onis and Wave-Force Artillery divisions to destroy the Soviets, but in an ensuing battle, the Imperial army was slowly destroyed. The Soviets later expanded to get more Ore and built up a sizable army. Drakon shells were fired from Apocalypse Tanks, smashing more King Onis and V4s were launched all over the place, shelling the Imperial base defenses.

The Imperial forces sent another wave of Tsunami Tanks and Jet Tengus after the Soviets, but the Soviet MiGs fired their powerful missiles at the transforming jets, while Hammer Tanks buried the Tsunami Tanks in a hail of 85mm cannon fire.

Getting upset with the Soviets, the Imperials sent 5 Battalions of King Onis, but the King Oni ended up falling to the Drakon Cannon fire. Several Apocalypse Tanks fell and were destroyed by the Wave Force Artillery divisions, but squadrons of Twinblades and V4 rocket launchers destroyed the artillery before they could destroy all of the tanks.

After the Soviet invasion force finish constructing their invasion base on the area, 3 of the Imperial Commanders notably Shinzo, Kenji and Naomi showed up on the scene and used every means available and every trick in their respective books to stop the Soviet Union and the invasion force from assassinating their beloved Emperor - but each and all of them slowly ended up on the wrong side of the Red Army, Navy and Air Forces.

Shinzo sent as many Tsunami Tanks, King Oni walkers, Wave Force Artilleries, Striker VXs, Mecha and Jet Tengus at the Marshal of the Soviet Union as he can, but all of them ended up being destroyed. Tesla Troopers were destroying walker after walker, Hammer Tanks destroyed Mecha Tengu after Mecha Tengu, Strikers were being rained on with gunfire by Twinblades, MiGs fired their Matryoskhas on all Imperial Aircraft - Tengus more likely - and finally, the Apocalypses used their cannons to incinerate the King Onis and Wave Force Artilleries. Once cleared, the Apocalypse Tanks' Drakon Cannons opened fire and in a matter of time, Shinzo's VIP Bunker was reduced to flaming cinders.

His last recorded transmission was this: "I die with honor. You will not!"

Naomi attempted to use Shogun Battleships, a platoon of Tsunami Tanks, King Onis, Wave Force Artilleries, Sea Wings, Naginata Cruisers and Jet Tengus, but all of them were sunk by Moskvin's Navy. Torpedos fired away from Akulas and into unfortunate Shogun Battleships, Stingrays activated their Tesla weapons, Sky Wings were downed by Bullfrogs, Naginatas were destroyed by Kirovs, while Twinblades and Dreadnoughts start striking Naomi's base. Scenes of apocalyptic devastation unfolded as the once-proud Imperial Navy sank below the waves. Finally, rendered vulnerable to attack, Naomi's VIP Bunker was destroyed by a volley of V4 Rockets from Dreadnoughts.

The Marshal of the Soviet Union takes upon revenge against Kenji for assaulting Leningrad by sending more Tanks and infantry at his base. Kenji threw as many robots, Tanks, aircraft and walkers at the Commander as he could, but all of them ended up being destroyed by Kirov bombs, Twinblade airstrikes and Drakon Cannons. MiGs launched their missiles at the Imperial air force, Conscripts unleashed their assault rifles on the Imperial Infantry, Hammer Tanks prepare to open fire on the Tsunami Tanks as Natasha sneaked past the Imperial forces, while Apocalypse Tanks were seen blowing up Kenji's King Onis.

With the hyperactive shogun's army now gone, Natasha called an airstrike on Kenji's VIP Bunker - upon destruction, Kenji transmitted one last message: "My Emperor... I have failed you!!!".

After the Soviets have eliminated the 3 Imperial Commanders from the picture and assaulted the Power Plants, then he actually freed the captured Soviet units which, up until now, were held hostage for their failed attempt to assassinate the Emperor.

The Soviet army headed to the prison camp, rescuing the captured Bear and Conscript, while fending off retaliation attacks from Tsunami Tanks.

The Conscript thanked them for rescuing him and his bear, but having got sick of the fish his captors force-fed him.

The Imperials retaliated against that liberation by sending a huge Chopper VX, Jet Tengu and Sky-Wing armada, but the Soviets counterattacked with MiGs. The comrade was evacuated from the area, while the MiGs protected the Apocalypse Tanks from Chopper VX Copters. Jet Tengus went down one by one and later on, enemy air forces was almost no more to the Imperials.

The last of the Imperial Navy were destroyed by the Soviet Navy and the Generators slowly got destroyed by the Stingrays and Dreadnoughts, while Akulas fended off the Swimming Tengus, Tsunami Tanks and Yari Subs.

As a response to the destroyed Instant generators, the Imperials sent a Shogun Battleship and Naginata cruiser waves to destroy the Soviet fleet, but Akulas fired ultratorpedos at them, while Dreadnoughts launch V4 Rockets at the Imperial Navy and thus sinking them.

The Soviets expand with the Sputniks to get more ore to build more heavier Tier 3 units.

Once both bonus objectives were completed, the almost full Soviet army, then besieged the Emperor's Palace with all their firepower and might. Kirovs dropped bombs on the Wave Force base defenses, V4s were launching Rockets at the Defender VXs, Conscripts swarmed Imperial Warriors, Twinblades were firing on the Imperial Tanks and Apocalypse Tanks start firing its Drakon Cannon fire on the Palace. However, the destruction of the biggest Imperial base, to the Soviets' surprise had revealed a red King Oni - Emperor Yoshiro's personal battle mech, piloted by none other than the Emperor of the Rising Sun himself.

After the destruction of the Imperial Palace, Yoshiro, in his own King Oni, emerged from the ruins of the palace and used his mech's AA Missiles to down several Soviet aircraft. Eye-beams to disintegrate some vehicles and massive limbs to crush several of the Union's mighty tanks; showing how formidable he was in a one-on-one fight. Then he proceeds to punish the rest of the Soviet assault force for humiliating him on his own palace grounds. 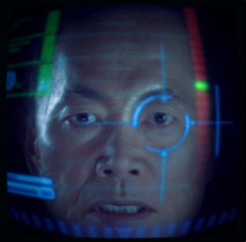 As word of their Emperor's emergence onto the battlefield spread, remaining Imperial forces rallied to assist him in driving out the Soviet assault force. Unfortunately for them, despite all their effort, the Soviets stood their ground and counterattacked.

Leading the attack were the Union's most elite Kirov Airships, Twinblades and Apocalypse Tanks. It may even be possible that the Marshal of the Soviet Union called down an Orbital Dump on the Emperor's location to halt his advance and Iron Curtained his tanks to prevent him from destroying the tanks. Under their combined fire, Emperor Yoshiro was cast down, his King Oni blown to pieces, and he himself killed by the physical shock of his battle-mech disintegrating around him.

Any remaining Imperial forces within the Palace complex immediately fled, surrendered, or even committed suicide as their morale and resolve was finally shattered with the death of their Emperor.

Without their beloved Emperor and his vision to lead the Empire of the Rising Sun, the destruction of so much military hardware, the occupation of Japanese soil, and the crushing loss of morale among the Empire's remaining soldiers, it lead to one final and clear conclusion:

The Empire of the Rising Sun was no more.

Japan and her territories were fated to join the USSR as one of their socialist republics; another conquest, and stepping stone to the Soviet Union's ultimate goal of achieving a global communist state - though "People's Republic of Japan" may not be a very nice sounding title at all to some.