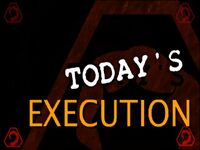 Today's Execution was a television program provided by the Brotherhood of Nod. Among other things, Nod had its own television channel, and avenues for propaganda, which they used with great effect. On it, commentators would remark upon the fates of prisoners or other condemned men who were to be executed by lethal injection, and it was broadcast live to many viewers. An example of what was commonplace on the show is:

Once, things did not go as planned when Anton Slavik, one of the condemned, escaped. The anchor later reported that Slavik was killed and his body was burned in the smelter of an unnamed factory, as was standard for traitors, and that Oxanna Kristos, a reporter who was actually undercover and working for Slavik, had died in a tunnel collapse. When Slavik struck back against the traitorous Nod leader Hassan, one of the tactical decisions he made was to capture the television studio Today's Execution was broadcast at. Maicheq was shocked to find Kristos alive, and was shot in the head by her on live television.

Due to the humorous manner in which the hosts of the show presented their broadcasts, it seems that Today's Execution was intended to both sadistically entertain and inspire Nod followers, while at the same time crushing the morale of GDI supporters who happened to stumble upon it (as Nod openly broadcast their own television network).