Operation: Tomb Raided is the fourth mission of the Allied campaign in Yuri's Revenge.[1] 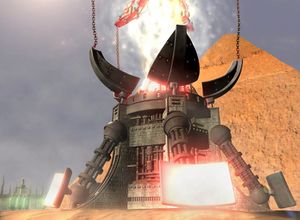 Yuri's Psychic Dominator at the Great Pyramid of Egypt

With the Allied victory in Seattle under his belt, General Carville now informs the Allied Commander that Yuri has captured Professor Albert Einstein in Egypt and is trying to complete the Psychic Dominator in time to prevent the Allies from overthrowing it. He also says that the German Chancellor is very concerned about Yuri's having Einstein enslaved, as this makes it far more likely that he will successfully finish the weapon. Now Eva Lee brings the Allied veteran to the Great Pyramid of Egypt, where Yuri is holding the Allied scientist hostage. Tanya rescues Einstein, and then the Commander annihilates the superweapon with his forces.

Briefing
Einstein after his rescue
Wounded Tanya being carried away