Tratos' Final Act is the third mission in the Nod campaign of Firestorm.

While GDI forces have been diverted to defend civilians, you are to lead an elite strike force to assassinate the mutant leader Tratos. Our new limpet mines will help you locate Tratos within his fortified base. Once located you must devise a way to reach him. GDI will have considerable protection for Tratos as he is their last hope at countering the Tiberium onslaught. Destroying their power supply should neutralize the firestorm defense system, and an effective air strike should deal with the sensor arrays.

Do not fail: this mission is integral to the future of the Brotherhood of Nod. 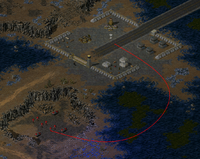 You start with three Subterranean APCs loaded with cyborgs, Rocket infantry, and three engineers, as well as six Limpet drones. The front gate to the base is guarded by a mutant guard armed with a railgun (similar to Ghost Stalker), and he will destroy any cargo truck with a Limpet drone attached to it. Simply move a Limpet drone around him and deploy it on the road behind the first gate.

Once the Limpet drone has attached itself to one of the trucks, it will drive into the base and reveal much of it. Before moving on, move all your remaining Limpet drones to the south until a small island with power plants is revealed. This is important for the next phase of the mission.