Following the Second Tiberium War, Nod scientists began looking at the problem of static base defense in a new way. To maximize effectiveness and survivability, the new generation of weaponry consists of four components; a central hub and three turrets. 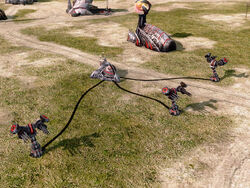 This is an example of the Hub Defense System.

The hub contains the fire control systems for the three turrets, which are to be positioned between the hub and the expected direction of enemy activity. The hub also contains sensors similar to those seen on mobile sensor arrays in the Second Tiberium War. If one of the turrets is damaged, the hub contains the necessary nanoassembly technology to rebuild it for more combat. However, the hub is also the system's weakness, if an enemy unit is capable of destroying the hub, the three turrets are also destroyed. However, correctly positioning of the turrets can stop short-range units from closing in on the hub.

There are three types of turrets that can be attached to the hub, but each hub can only control one type. The Shredder turret shoots out shrapnel at high enough speeds to be lethally dangerous to enemy infantry. Laser turrets were specifically calibrated to attack enemy armor. And last, SAM turrets are capable of striking enemy aircraft. However, the iconic Obelisk of Light, Nod's most powerful and infamous defensive weapon, was not designed with the hub system in mind.

In Command & Conquer 3: Kane's Wrath, the quad turrets upgrade was introduced, allowing a fourth turret to be mounted directly on top of the hub.

Hub-based defense systems did not appear in the Fourth Tiberium War.