Turtling is a tactic that emphasizes building a strongly defended base, rather than focusing on offensive power. In the eventuality of a military stalemate, the "turtle" is much more likely to survive an assault on his base than someone who focuses on rushing. The ability of this tactic depends upon certain circumstances, including the power of the base defensive structures of a particular faction.

While an expert turtle would be able to outlast his opponents, this strategy has several drawbacks. The requisite walls and base defenses take time to set up, and a blitz with tanks could likely penetrate an enemy's defenses if it occurred early enough. Also, turtling is fairly expensive, and the late-battle focus on defenses can cost a military detachment due to the lack of collected reconnaissance and difficulty replacing depleted resources. Also, the best defenders are not always good at offensives, and overly focusing on building an invulnerable base can lead to an atrophied strike capability. In addition, the most powerful base defenses are also the most power-hungry, and if the generators on a base are disabled, a turtle's plans may quickly fall apart. Finally, WMDs can punch a hole in a base's defense, no matter fortified they are.

Patriots are perfect for enemy tanks and in groups perfect on even Overlords.

The United States' defenses were highly advanced, having armour- and aircraft-stopping Patriot missile systems and Fire bases which, in addition to having a long range cannon, could be garrisoned by infantry men. While it's role depended on what a variety of infantry a general elect to station in them, the most popular usage was to use Pathfinders to fend off infantry.

Alexis Alexander was well known for using turtling tactics. She developed and deployed EMP Patriot systems which would disable enemy vehicle and instantly down small aircrafts making them difficult employments to remove. These, along with other defenses, made her able to simply hold her position while she bombarded her enemies with Particle cannons and Aurora Alphas. The drawback was she can't use tanks.

While not quite as known for turtling, General Townes used his Laser defense turret to turtle when necessary. In simulated defensive battles, Townes surrounded his base with laser defenses, which could successfully stop any head-on engagement. However, the power consumption of the defenses was a flaw which he could not overcome; he could not power all the turrets at once, and attacks from multiple angles would be able to breach his defenses. 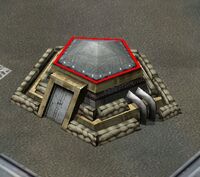 This defense is cheaper than the gattling guns but requires infantry.

China was excellent at defense, due to the versatility of their defensive structures. To counter infantry, aircraft, and light vehicles up to the size of a Toxin tractor, they could built the Gatling cannon, which outperformed American defenses by firing bullets that could not be jammed by countermeasures like missiles could. In order to stop tanks, the Chinese can build bunkers loaded with Tank hunters. This combined arms defence has the added advantage that bunkers do not need power and can operate if you lose your reactors. Also, the Chinese can lay mines around their structires and drop cluster mines from the sky to block off chokepoints and to take an overconfident enemy by surprise. If a General's defensive structures were destroyed, the enemy would roll his men right over the land mines and decimate his assault force. The Chinese defence was arguably the most effective of the three factions.

General Shin Fai, the infantry commander, had an improved version of the bunker, called the Fortified bunker, which had twice the capacity of a standard one. 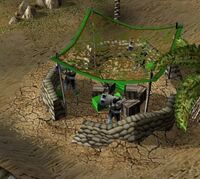 Stinger sites are great on light vehicles but watch out for snipers.

The GLA were not able to turtle nearly as much, as their cheap defenses could not take as much damage.

Although they did deploy some basic defenses. Stinger sites, which were a circle of sandbags with a net thrown overhead, were effective against armored threats, but were very poor against infantry. Tunnel and Toxin network openings were equipped with machine guns and toxin sprayers respectively.

Other means of turtling[edit | edit source]

Garrison buildings for defense but watch out for anti-garrison weapons such as Microwave tanks, Dragon Tanks, Toxin Tractors and Flash Bang Grenades.