Surveillance footage of the Twinblade's primary and secondary combat functions

The Soviet Union is internationally reviled for its "zero-tolerance" policy toward battlefield deserters, in what many critics deride as an unethically ruthless attitude toward warfare. This policy is widely enforced by the Soviets' emblematic combat helicopter, the KA-65 Twinblade, due to its ability to hover over the battlefield in an optimal position to quickly identify and deal with those attempting to flee from the front lines. In a recent release, however, the Soviet Military Affairs Bureau announced that battlefield desertions recently dropped to a record-low zero percent (rounded to the nearest whole number), and thanked the Soviet people for their unwavering devotion to the elimination of their nation's enemies. Nevertheless, the Twinblade is expected to continue to see heavy use in ongoing conflicts between Soviet and Allied forces.

This sturdy, well-armored mainline combat helicopter features swivel-mounted dual heavy-duty machineguns in addition to four rocket launchers slung under the wings. Further, its three-rotor design (two main rotors with one in the tail) gives this gunship unparalleled stability among similar aircraft. It bears mentioning that the Twinblade's machine guns, which pack more than enough punch to chew through an enemy squad in no time, are ill-suited against armored vehicles--though, of course, that's what the rockets are for. This is a deliberate trade-off to reduce the mass of the Twinblade, which helps make the gunship remarkably quick, yet muscular enough to transport a Tesla Trooper fire team or even a V4 rocket launcher to and from the front. 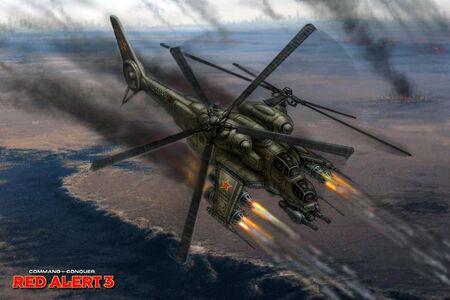 Because of all this, Soviet battlefield commanders often quip that the Twinblade is "very, very Russian", in the sense that this helicopter is considered to be direct and uncompromising. Even still, it is not without vulnerabilities. All that ammunition carried on board, and the relatively delicate engineering needed to make the thing somehow fly straight, means the Twinblade is quite susceptible to anti-aircraft fire. In one incident, an entire Twinblade squadron carrying a Soviet hammer tank platoon was ambushed and decimated by a wing of Allied Apollo fighters, causing the Soviet Union to fervently re-declare war against France, Germany, and Great Britain in a harshly-worded announcement.

Considering the Twinblade may be carrying precious cargo, the loss of even one can put a heavy toll even on the vast riches of the Soviet Union. This, along with the Twinblade's ability to hover watchfully over a battle, gives the aircraft a uniquely important and authoritative role within the Soviet military. Today, Twinblades all carry Soviet commissars on board as copilots, men well-versed in the Soviet doctrine who do not hesitate to goad their enemies or motivate their brethren by any means necessary.

Battlefield reconnaissance has revealed at least these facts about the Twinblade: