Tyrannosaurus Rex was a dinosaur that went extinct at the end of the Cretaceous period, 65 million years ago.

However, due to time-traveling invented by professor Einstein, a T-Rex captured by Soviet forces named Rexy was seen several times.

Role in the war[edit | edit source] 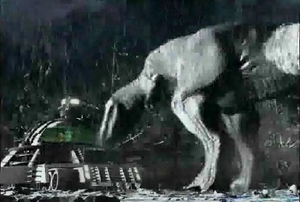 Yuri in the time machine and T-Rex in thunderstorm; 65 million years ago

Humanity's first encounter with the king of dinosaurs occurred during the Psychic Dominator Disaster. After hijacking Professor Albert Einstein's prototype time machine a crack team of Soviet soldiers, led by Boris, accidentally traveled farther back in time then they intended, emerging somewhere in the Cretaceous period rather then simply one year prior. The team found themselves momentarily stranded and under siege by not one, not two, but an entire pack of T-Rex's, all of them bent on devouring every human being they could see. Fortunately the team was able to fend the monsters off long enough that their Soviet technicians repaired the time machine and transported the team to their proper temporal coordinates.

Tyrannosaurus Rex is an extremely strong unit with great defense thanks to his tough skin as well as mighty attack. Even a group of tanks is easily destroyed by him. However, he is an easy target for hero unit Boris and his AK-47, because, as he says: "You are no match for Boris!".