The United States of America (United States, America, US, or USA) is a federal democratic republic in North America consisting primarily of fifty states. The United States is the world's third largest nation by population and fourth largest by area, and as of 2009, the world's largest economy, with the highest income per capita for a country of its size.

The United States established its independence after British colonists rose up against their colonial masters in the late 18th century. Rapid industrialization in the 19th and 20th century was accompanied by territorial expansion and scientific innovation. By the early 20th century it is considered a "Great Power". Following the defeat of the Axis Powers in the Second World War in 1945, the USA was one of the five permanent Security Council members in the United Nations.

Due to the political, economic and military dominance of the United States, it is considered one of the two superpowers of the world during the early 21st century. The threat that global terrorism posed to American global interests dragged the United States, along with China, into a world war against a rogue paramilitary organization called the Global Liberation Army. Although US forces initially scored early victories in the war, the United States ultimately came out of the conflict exhausted and humiliated by the GLA and overshadowed by China.

Military insignia of the US Armed Forces during the GLA Wars

The United States of America was one of the 2 world superpowers along with China at the beginning of the war against the GLA. It was aided by China in this conflict and had great influence over world politics. At first, the USA was reluctant to get involved in any battles against the GLA, denying claims that the organization was likely to 'run into' their forces stationed in the Middle East. However, around 2020 the US joined the war to try and drive the ever-spreading GLA out of Asia, as it became clear that the organization indeed threatened American global interests.

The American's first taste of combat with the GLA came with a GLA force overran the American airbase in Adana, Turkey, followed by a series of humiliating defeats at the hands of a brilliant GLA general culminating in the defeat of Chinese and American forces stationed at Baikonur in the First Battle of Baikonur. The Americans quickly struck back against the GLA in the Middle East, striking against GLA strongholds in Iraq, Yemen and also in Kazakhstan. The first wave of operations against the GLA culminated in Operation Last Call, an attack by combined US and Chinese forces against the GLA 'capital' located at Akmola, Kazakhstan. US officials believed that this would be the end of the GLA, and American troops celebrated with the locals in Akmola following the victory.

In reality, the GLA defeat at Akmola was not the end of the organization, as it had spread too far throughout the region, and quickly resumed military operations in the Middle East. Baikonur Cosmodrome, still under GLA control, was used to launch a biochemical missile against a US naval base in northern Europe.

The US launched a new campaign to re-take the facility and crush the GLA's new leadership. Dr. Thrax was identified as the new GLA mastermind. The US worked systematically, gathering intelligence on the nefarious Thrax through covert operations deep into enemy territory, while simultaneously conducting other operations where necessary (such as protecting UN civilian aid from GLA attack). During Operation Black Gold, the US entered Iran in order to capture the oil fields that were funding Dr. Thrax's campaign of terror. Following the success of this operation, the US followed Thrax's forces to a city with a number of missile launch pads, from which Thrax planned to launch rockets that would spread his latest toxin, Anthrax Gamma, across the globe. The US stood firm in the face of this diabolical threat, and successfully defeated and killed Dr Thrax, and captured all of his subordinates. Having saved the world from the threat of mass contamination, US Commanders bathed in the glory and respect that came in from far and wide.

For a while it appeared that the USA had finally defeated the GLA. The GLA was indeed fragmented after the loss of Dr. Thrax, but soon regrouped under a new leadership. In revenge, the revitalized GLA used a captured particle cannon to destroy the aircraft carrier, USS Reagan, stationed at Crete. This was a great blow to American prestige but worse was to come. The GLA immediately struck the west coast of the United States, stealing various chemical and biological weapons. America had never been invaded by a terrorist organization in this way before and many believed the US was "impregnable". US officials were shocked and pulled much of the US forces overseas back to the states in what they called a "tactical re-evaluation of military deployment," which essentially meant retreat.

While well-meaning, the sudden withdrawal of US troops caused much of Europe to fall to the GLA. The US CENTCOM Europe Base in Stuttgart, Germany was overrun by the GLA, who looted its high-tech military hardware for their own means. Global opinion considered this a defeat. When China's assault on the GLA successfully defeated the GLA in Europe, China surpassed the USA in global importance, declaring that United States' power was "reaching no further than its own shores now."

After the War[edit | edit source]

With the captured GLA leaders on trial in the World Court and NATO a mere political afterthought, the Chinese Premier and the European leaders met at the meeting of the newly-established Eurasian Unity League, to discuss future cooperation. From Hong Kong to Paris, the citizens of many nations cheered China's actions in Europe, and China is now considered the world's leading superpower.

The war had left the US reduced to a mere shadow of its former self. As it has been weakened and humiliated by the GLA, the United States was forced to order its forces to pull out from overseas to strengthen homeland security and rebuild, which shattered America's global influence and resulted in the fall of its weapons and facilities to the GLA.

With its forces shattered to ruins and commanders either killed or captured, the GLA was no longer a significant threat to the world.

Military forces rely on expensive high technology munitions. Having the largest Army, Navy and Air Force in the world, the U.S. also has control and many assets in space, not to mention large number of troops stationed in the Middle East, South Asia, East Asia, North Africa, Europe, and the U.S. itself.

One of the world's superpowers and a permanent UN Security Council member with veto powers. Defense treaties with neighboring nations and many nations in Europe and the Asia-Pacific region allow the US to gain influence in those said regions (i.e. oil, politics, etc.)

Having the world's largest economies the USA can afford to deliver money to its commanders. This is directed to the Supply Drop Zones, and is much needed, as cutting-edge US units are often expensive. While their Chinooks can deliver large quantities of supplies, the United States has the slowest gathering rate of all factions, requiring two or more Chinooks in the air at all times to maintain suitable funds. While not having the vast numbers of the GLA, the US has a technological edge, its units able to inflict precise and devastating attacks, and with an increased likelihood of being able to come home to tell the tale. 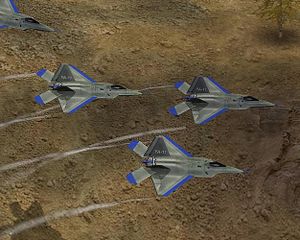 The Americans used F-22 Raptors as their number one fighting unit.

The USA uses advanced, but oftentimes experimental, technology with precise targeting and well trained infantry. It also commands a powerful air force, which includes the F-22 Raptor and the Aurora strike bomber. The USA's superweapon of choice, the Particle Cannon, allows for more precise and continuous destruction than other factions' crude, area-blast weapons. With a vast amount of intelligence-gathering resources available, US commanders are scarcely seen making any blundering errors when engaging the enemy, regularly picking the correct weak spots as indicated by their satellite scans. Most of the USA's units are of high quality, despite more expensive than their Chinese counterparts; even their basic infantry unit, the Ranger is able to defeat its Chinese and GLA counterparts. While their high technology greatly augments the USA's fighting capabilities, it comes at very high costs. This, combined with their slow economy, forces the USA to field a smaller and more specialized army.

The Crusader-class Tank, as of all modern MBTs, can defeat its foreign counterparts (except when the Horde Bonus applies to Battlemasters) in one on one fights and the Paladin-class is known to shoot down small missiles with lasers but are expensive and require a General Point (like Marauders) for standard tanks.

Obviously high due to the use of proven high-tech weaponry that can outpower, outclass and outtech the raw firepower of tested and proven weaponry by the People's Liberation Army (China) and the guerrilla tactics and old weaponry (World War II and Cold War Soviet-era weaponry) of the Global Liberation Army (G.L.A.).

Some technologies used by the U.S.A:

War against the GLA

The United States of America in the Generals series shares some characteristics with the Global Defense Initiative from the Tiberium series as well as the Allies from the Red Alert series, in which they are a peacekeeping force trying to fend off terrorist attacks. The USA are technologically similar to the GDI that they can use transportation of troops to carry around the battlefield like the Chinook.  Like the GDI and Allies, the USA military insignia features a stylized bird-of-prey superimposed over a sword and shield.

The blue-colored US units the player commands is possibly the US Marine or the USSOCOM, while the light-blue units in later missions of Generals 1 could be seen as coming from a fictional and separate US Central Asia command.