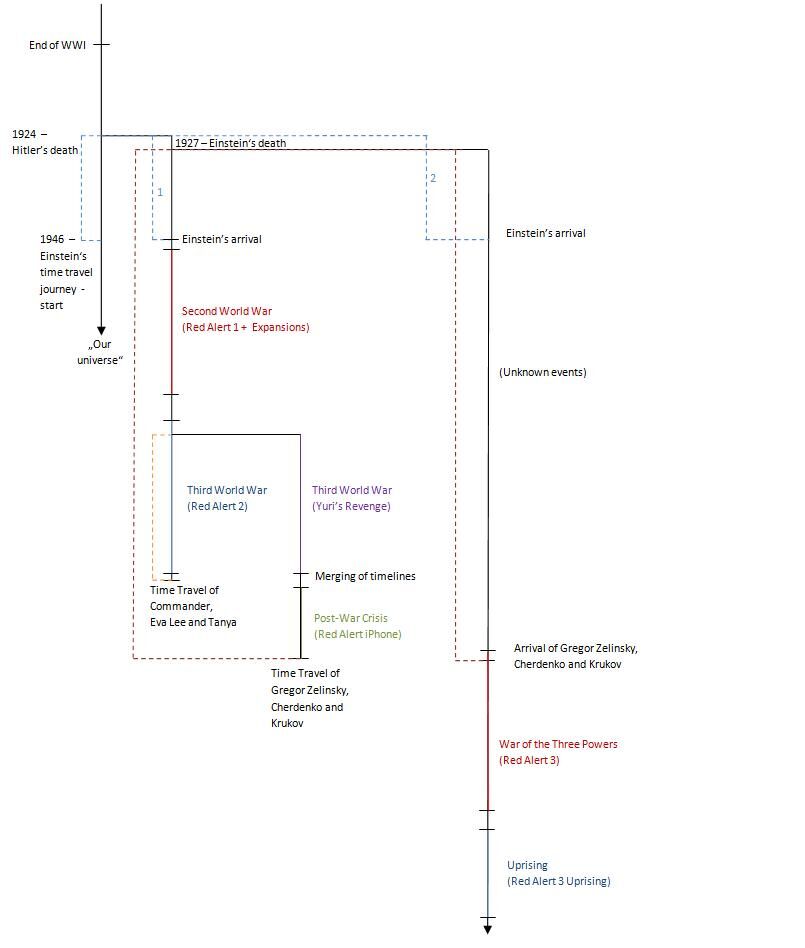 Well, this is in my opinion a complete timeline of the RA universe.

It seems that different time machines change times in "different" ways. For example:

Now we think about this: if someone create a different reality, is there any reason why he should not be born in this new reality (except if he really kills himself in the past :D)?

Quite complicated solution of time travelling, but I think it's logical and makes sense.

EA did many mistakes with releasing RA3. Not only that many missions must be canonical despite they are in non-canonical campaigns, but the original idea with erasing Einstein is very difficult...

So in the timeline of RA3 there is maybe still Einstein! Well, we can presume that something happened to him and he did not survived - somethink like there was a deathful problem with time travelling from 1924 to once more changed present (changed by the Soviets) - the changing of timeline was deadly to him.

If the Soviets had travelled back to 1946, a few years later, and erased this Einstein, everything would have been as EA wanted... EPIC FAIL xD

Well I hope that this is all I can tell about this. I will try to answer any your questions if have any.

PS: The campaigns in RA3... Soviet campaign fits exactly on the time travel, but what about the canonical Allied? (Well for me canonical the Soviet. :)) In Allied campaign are several missions before the Empire attacks the Allies and Soviets... But in the Soviet campaign the Empire is attacking just from the end of their time-travel arrival! So? There are two solutions:

If Einstein erased Hitler in 1924, Germany would not go Nazi and Einstein wouldn't need to escape to United States to create a time machine to erase Hitler anymore in present, so such thing would "never happen".

Same principles, if Soviets erased Einstein in 1927, there would be no Einstein-originated, Sci-Fi like gadgets for Allied, therefore Soviets wouldn't need to go back histroy to erase Einstein anymore in present, so such thing would "never happen".

Moreover, since erasing Einstein also erasing his contributions (i.e. nukes), there would be no time-space travel technology once Einstein is erased. So how Soviets can travel back to 1927 in present? They even shouldn't know something called time-travel.

Did you notice in opening cutscene of Red Alert 3, Gregor Zelinsky warned Cherdenko and Krukov "do not touch anything", but how can they be OK if their feets (or boots) making contact with the floor?
Quote: "If Einstein erased Hitler in 1924, Germany would not go Nazi and Einstein wouldn't need to escape to United States to create a time machine to erase Hitler anymore in present" And that is the famed temporal paradox. In RA1s case - since Hitler is erased, Einstein would have no need to go back in time to erase him.
Retrieved from "https://cnc.gamepedia.com/User_blog:Moskvin/Red_Alert_Universe_Timeline?oldid=20803"
Categories: