User blog:Ssskoopa/Ssskoopa suffers through Red Alert Online so you don't have to: Prologue

So, Red Alert Online, to the surprise of pretty much nobody, is an absolute train wreck of a game. It's pretty much just a reskinned version of Global Strike, designed to suck money out of your wallet, and nothing more.

And that's why I preordered it: 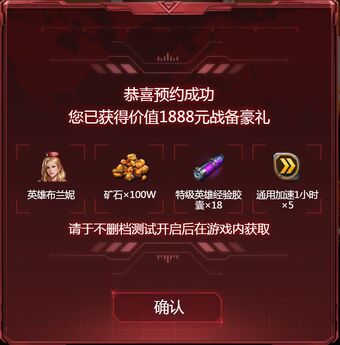 As a certain Internet critic always says: I remember it, so you don't have to. I'm going to suffer through this horrible excuse of a game, so the readers of this Wiki won't have to. But before I do that, let's take a look at one of the reviewer previews of this game that I found on Bilibili.

Most of it is fairly boring, though. So here are the highlight reels (lowlight reels?): 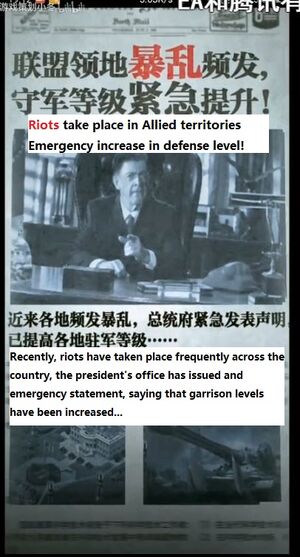 These are apparently the intro cutscenes. Always a good sign when they didn't even bother making their own, and just reused screenshots from Red Alert 2...

Oh, and in case you can't tell, that's Ackerman. Lord knows why they decided to give him photoshop hair. If they wanted a president with hair, why didn't they just use Dugan? 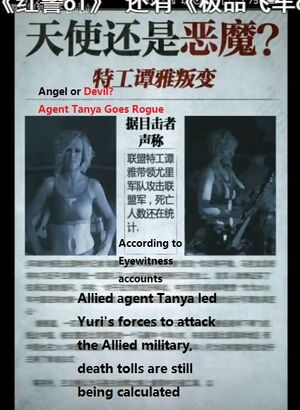 Wait... All the other stuff are from Red Alert 2, so why the hell did they use Red Alert 3 Tanya (and a badly photoshopped Ackerman)? Don't tell me they can't even tell the difference.

Also, I'm pretty sure that Jenny McCarthy didn't give them the right to use her likeness... Come to think of it, is this even legal? 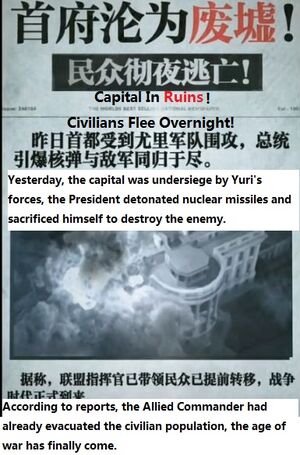 Oh, and then this happened. *Insert That Escalated Quickly meme here*

And now, the tutorial. 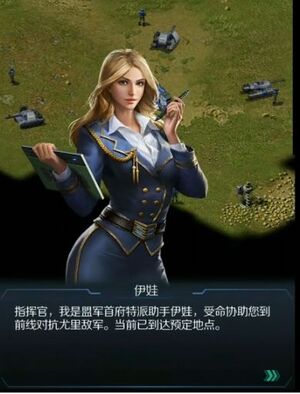 This is Eva, apparently. Once again, despite almost everything else being based on RA2, she's obviously based on the RA3 version. WHY?! 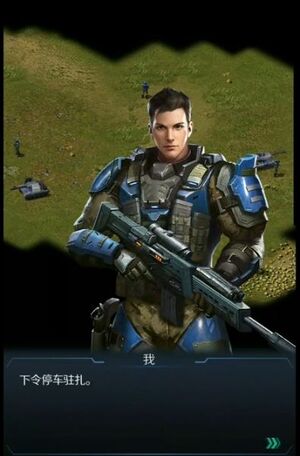 This dude is the player character, whose name is literally just "Me". Question: If he's the commander, why the hell is he carrying that huge gun for? Doesn't he have soldiers protecting him? Also, that armor looks nothing like RA2 Allied or even RA3 Allied armor. He looks more like a character from some generic sci-fi shooter.

So, "Me" orders the MCV to be unpacked, and a base is built up unrealistically fast, even by RA standard. He builds a refinery and a barracks. And then... THIS happens. 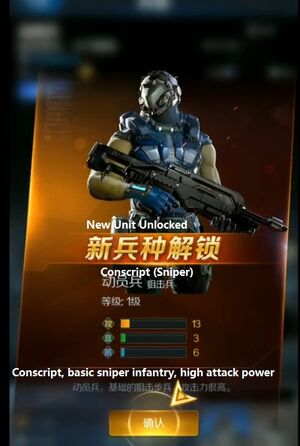 A conscript, the makers of this game thinks that this is what a conscript looks like. And that Allies use conscripts. And that conscripts are snipers.

So after training some...ugh..."conscripts", Yuri's forces launch an attack on your base, and a cutscene plays. 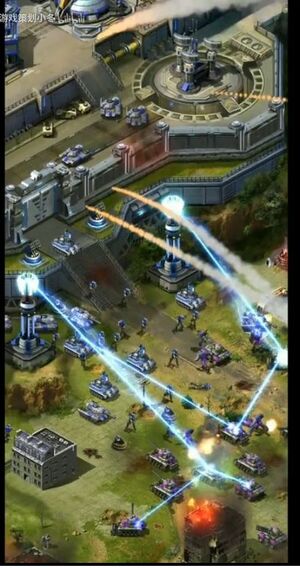 The prism towers use the Tesla coil sound effect for some unfathomable reason. Apparently, "Me"'s forces took heavy losses from this battle, and "Me" said that he can boost combat strength by appointing a "hero" (yeah, that's the term he used) as the leader of troops in the field.

If this game was made by literally anyone else, this would be the perfect opportunity to transition to the "Rescue Tanya" storyline and have her as our first hero. But as you probably know by now, Tencent is not like anyone else. 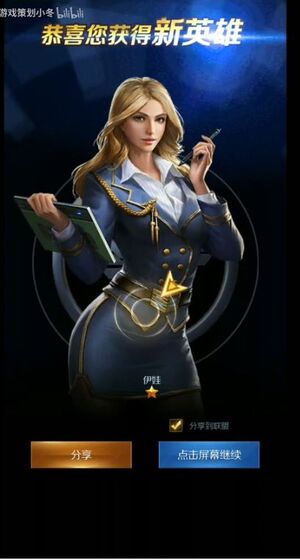 The new hero he appoints? It's Eva. Eva, the intelligence officer, as a leader in the field.

You know what? I think I finally figured out who "Me" is, he's the military genius behind this masterfully executed operation.

So after all that, you're contacted by your superior, and given this bit of information: 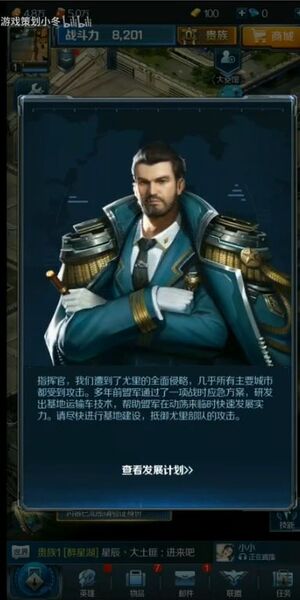 The gist of it is that Yuri hit all the major cities at once during the first wave (Why is he telling "Me" that? Shouldn't "Me" know that already? Storytelling at its finest people.), but years ago, the Allies developed the MCV technology in response... Wait, WHAT?! You're saying that the Allies don't have MCV until Yuri's Revenge? That RA1 and RA2 never happened? What kind of fucked up Bizarro-verse does this game take place in?! 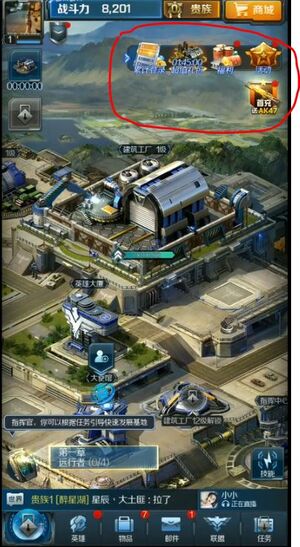 As with every other garbage Chinese mobile game, the corner of the screen is filled with garbage like login bonus and in-app purchase bonus. But somehow, RAOL managed to make even less sense than those. 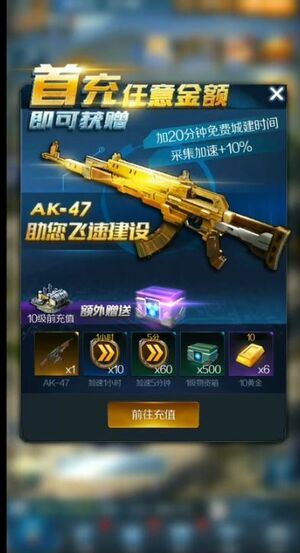 For example, this is the bonus item for the first in-app purchase, an AK47, that boosts construction speed, somehow. The idea of an AK47 being a bonus item in a game on the scale of Red Alert is already laughable, but a rifle that makes you build faster? What were they smoking when they came up with this stuff?!

Well, the Chinese are crazy, especially in regards to gaming... and all the pseudo cosplay futuristic armors appear to be a nod to the Peacekeeper from RA3, as for the conscript being what it is, could be that the Chinese are not very fond of the Ushanka wearing underequipped Commie ragtag soldier stereotype.
Yeah, the archaic depiction of the Chinese from Generals was enough to get it banned in China. And what do they have instead of Soviets, are there only the Allies and Yuri factions?
Oh, by the way... they went full made in China mode hahah.
Yeah... About that... The Soviets aren't in this game, at all. Probably because it would have never made it past censorship if they were.
Their units appear as Allied units, but the Soviets themselves are never mentioned. Tencent would be fucking suicidal if they depict ol' hammer and sickle as the villains of the game.
Yeah... That's the Tencent I know, alright. Us Chinese often joke that they are masters of Sharingan and Unlimited Blade Works.
So cheap stuff in that game. I would even make a better unit (a little realistic) than those who made this rubbish game. To make such Red Alert game needs a huge search and hardwork.
This was pretty funny. I hope you're going to do more of these posts. And yeah, the conscript image doesn't exactly scream "well versed in Red Alert lore".
Retrieved from "https://cnc.gamepedia.com/User_blog:Ssskoopa/Ssskoopa_suffers_through_Red_Alert_Online_so_you_don%27t_have_to:_Prologue?oldid=20842"
Categories: