Hi, welcome to Command & Conquer Wiki! Thanks for your edit to the Croatia page.

Thank you for contributing to the Command and Conquer wiki. I recently noticed you created a page called Howitzer (Red Alert 2). Thank you for creating the page; however, I am not sure if it is fanon (fan created canon). If you have any sources to cite, please do and also let me now where you got this information. If I don't know soon, I will put the page up for deletion. Happy editing,

Hey Sheldonist, just a quick question: would it be possible for you to help me out a bit with categorizing images? It isn't a priority job, I manage with the current uploads, but if you could pop in and categorize an image from time to time, I'd be grateful :) http://images1.wiki.nocookie.net/fallout/images/0/08/Personal_Sig_Image.gif Tagaziel (call!) 13:06, July 15, 2011 (UTC)

One more note: don't forget adding the licensing (fair use in most cases) and removing extraneous categories, leaving just the most specific one. Here's an example of how it should look properly:

Extra information as well as fair use rationales shouldn't be removed, though. Thanks for the help! http://images1.wiki.nocookie.net/fallout/images/0/08/Personal_Sig_Image.gif Tagaziel (call!) 17:58, July 15, 2011 (UTC)

Life is busying me at the moment, so I'll give you a link for cool stuff to import to the Wiki:

DIDYA SEE WHAT I DID HERE, DID YA?

Sorry for immaturity, but we need to seriously rethink navigation. And update the navboxes. http://images1.wiki.nocookie.net/fallout/images/0/08/Personal_Sig_Image.gif Tagaziel (call!) 15:19, January 7, 2012 (UTC)

Didn't notice you didn't have amdin rights. Now you do and you should be able to edit all the protected pages. http://images1.wiki.nocookie.net/fallout/images/0/08/Personal_Sig_Image.gif Tagaziel (call!) 17:48, January 7, 2012 (UTC)

I split the eg. RA2 Ore refinery articles for clarity. We've tried having several units/buildings in the same article before and the end result is a horrible mess. It's better to split them whenever differences arise and only have single articles for things that are really shared (eg. the RA1 ore refinery and harvester, war factory, construction yard and the like). http://images1.wiki.nocookie.net/fallout/images/0/08/Personal_Sig_Image.gif Tagaziel (call!) 12:59, January 8, 2012 (UTC)

Hey, can you make a newspost summarizing recent developments in the C&C World? I mean mostly the broad strokes about Generals 2, Tiberium Alliances and its beta. In the meantime, I'll upload a new background, start some projects and work on the featured articles. We're 'bout to get our own sticky in the forums, so we need to look classy. As for the newspost, you simply make a blog post, formatted like a normal article, and slap [[Category:News]] on it. Thanks in advance! http://images1.wiki.nocookie.net/fallout/images/0/08/Personal_Sig_Image.gif Tagaziel (call!) 14:38, January 19, 2012 (UTC)

That's what I was thinking. Since Universe pages would be by necessity lore pages, we'd need to link to all the category pages in Category:Tiberium universe. http://images1.wiki.nocookie.net/fallout/images/0/08/Personal_Sig_Image.gif Tagaziel (call!) 08:25, January 25, 2012 (UTC)

Hey Sheldonist,
Thanks for the reply!

First off, I would not really consider a promotion or anything, unless it was in course to help this wiki.

I will also get straight into making some articles better! If you know of any reference standard articles I can compare with, and use, I would appreciate that. …I do not really want to put the Generals articles off on a tangent of style and editing format.

Hey Sheldonist,
Thanks for the link to the project page.

I have started it, with doing some of the Combat Chinook (history revision) page. I shall continue as I can. I although will only be able to contribute to the Generals universe, as that is the only one I know.

P.S. Is there any way of making an internal link with a history revision?

Yeah, I have had a look at the Scorpion page. I see what you mean in it being a reference standard page for Generals.

i am new to this forum but i have been around since tiberian dawn was the only C&C game out there.

i have some questions about this site and i wonder if you or anyone else can answer them?

I have some questions. Can you answer or someone else perhaps?

Hey man I tried to edit the pictures on the page Typhoon Submarine (Red Alert 2) but it went wrong can you help me fiz everything? I tried adding a picture to the gallery but i ended up deleting all the other existing pictures. Staygyro 22:58, April 7, 2012 (UTC)

hi i am new on this forum but not new to the C&C games. i played tiberian dawn when it was out around 96-97.

my favorite is C&C TS but i have played several others in the series. i have never tried tiberian twilight.

have you played it? is it really that bad? what makes it so bad. as of now i have not been too motivated to get it...

anyway i am new here and i would like to have some small talk with other C&C fans, who would you recommend?

as of questions i have a few. how do i insert a picture in the presentation like you did? i can't make it work properly.

So how are we to know what has or hasn't been done? I use the categories to see what has to be done, what is done, and possibly what's missing. If you have a new idea or a good link to a TODO page, that would be helpful. As of yet, I'm the only one working on the buildings and units of TA (besides those who wish us to understand Sam's affinity with and love of male genitalia), and any help would be appreciated.

I can see how the page is to be, but I cannot seem to be able to see the source code. I'll check into it later. And giving me some time to work on the page would be nice, as I had only just begun.

Thank's for the offer and the invitation. I still working on my email (need some wrap up though). I will enlist if everthing is up and go. I may sign in using other IP address though as this IP address is "borrowed" from my colleagues. I still got issues (especially my english) as I tend to use "engrish" and "singlish" often with a bad type (it is in a hurry do to the "borrowing" things). I'll get in touch soon.

The "beta" icons were found by my friend on the local mainframe of the system who works on the Westwood (1995-2000). The details were according to the mixed beta rules.ini . I got the beta version on a CD and the campaigns were different. And I also fixed the details especially the "18" speed (I think got my PC hacked by some crazy peep >:(). I didn't include the "rules" for the other weapons because it's very long.

BTW, The details were not fan-made.

The rules.ini of the beta version: 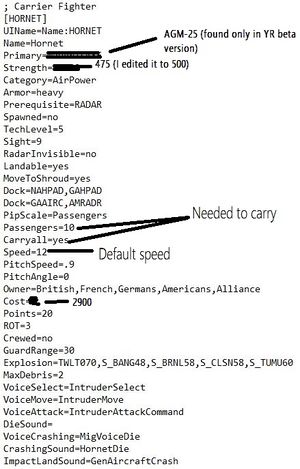 The beta version rules of the Hornet

Theres this user called Pricerocks245 who vandalized the wiki by replacing the portal pages for the Tiberium and Red Alert Universe and the Recon pod page with "have fun replacing this." He also insulted the wiki. Could you block this user? -- Privatejfx141 (talk) 15:38, July 22, 2012 (UTC)

Thanks for the welcome.

I see most pages are well-written, but some lack some final polishing (capital letters, a few writing mistakes, etc) , I will see where I can help to improve the Wiki.

Just found out that the Airborne and Paratroopers articles are nearly about the same thing (both even have the same cameos). Should these articles be merged? -- Privatejfx141 (talk) 13:01, August 9, 2012 (UTC)

Just found this Command & Conquer: Generals Alpha trailer on Youtube, should this be added to any of the articles about Generals 1?

Something weird with games template[edit source]

I just realized there is something wrong with the Template:Games/doc. Most of the examples have been removed and the description was something about Gears 2 (off-topic). Could you change the template documentation back?

BTW, could you also remove all the Tiberium Alliances duplicate images uploaded on this wiki? I have already marked them with a delete template. -- Privatejfx141 (talk) 02:07, August 28, 2012 (UTC)

Tchutchsaga just uploaded this video today. It showed some extended scenes in the first Generals 2 teaser -- --

Managed to find the better quality version of the C&C Generals Alpha trailer by tchutchsaga :D BTW, how does tchutchsaga find these things? 0_0 --

This just came to my head. Should we improve the wiki's welcome message to new users? Many popular wikis (e.g. Starcraft, Call of Duty, World of Warcraft) have a nice-looking wiki welcome message.

I've got it from the CNCSaga french site, seen in this thread: http://forum.cncsaga.com/topic/7799-quelle-faction-attendez-vous-le-plus/

BTW, you may want to look at this: http://biblocality.com/forums/showthread.php?4800-CNCNZ-COM-is-One-of-the-Most-Antichrist-Gaming-Fan

Hey man, If you could teach me how to upload some pictures to the red alert wiki that would be really helpful, I have a large amount of pictures that the site is currently without. Thanks in advance Kazutadashi (talk) 04:26, January 13, 2013 (UTC)

i know a lot of red alert 3 units. i can give strategies. ask me anytime!

Don't make Private admin, he insulted a Spanish person on the Men of War wiki.

I'm definitely not inclined to trust dubious unlogged users that flame others without grounds. Even if Privatejfx141 did anything near insulting someone, which he obviously didn't, the "victim" highly likely did something to deserve it.

Muhammed59 (talk) 17:45, February 8, 2013 (UTC)hi sheldonist how are you . im sorry to makeing you upset at me because of generals 2 . my goal is to edit lot of staff to generals 2 with you so i wish you to forgive me . ok now lets go to generals 2 (of course after you forgive me). i have a new photo of gla long range wepon this is the photo

I was just looking at the Kane's Wrath Nod Missions, and I saw duplicates. One pair of the duplicates have more details, the other does not. What should be done about them?VivianCoffee (talk) 23:34, February 17, 2013 (UTC)

I managed to find a gold mine, or should I say, platinum mine of information on CnC-Inside: http://www.cnc-inside.de/uebersicht/command-and-conquer/alle-fraktionen/alles Some members from CnC-Inside had recently played the alpha stage of Generals 2 / C&C 2013. Now we need someone German to properly translate all this. - Privatejfx141 (talk) 01:51, February 26, 2013 (UTC)

Pages for the Generals 1 War Factories and Barracks[edit source]

Should I make seperate pages for the C&C Generals 1 War Factories and Barracks depending on the factions?VivianCoffee (talk) 22:42, February 28, 2013 (UTC)

hello Sheldonist . it is a long time since the last talk. there is a problem while i was editing the Basic infantry .i have the photo of that infantry and i want to upload it .i press the upload butten but it doesn`t work so what must i do?Muhammed59 (talk) 07:56, March 21, 2013 (UTC)

Just here to inform you that several members of the official forums have decided to create the C&C Community Wiki, a wiki about C&C fansites and community members:

could you please restore this image that i found it here.i know that you will tell why i removed some words because i dont the Arabs wont support the GLA .Muhammed59 (talk) 15:16, May 11, 2013 (UTC)

O hello! Thanks for posting in my wall. Sorry for late reply, I forgot to login again.

On Setting under organizations it misspells Red Alert As Red Alerty. Just to let you Know

Also Delete The comment that is directly above this one I Messed up on writing this sorry about the trouble.

Gamescom 2013 Day 3 CNC hour showed that the EU VTOL was named Valkyrie, so I think the page title needs to be changed.