From Command & Conquer Wiki
(Redirected from Villainess In Distress)
Jump to: navigation, search

Villianess In Distress is the ninth mission in the Nod campaign of Tiberian Sun. It follows CABAL's rescuing of Anton Slavik and Slavik's rescuing of Oxanna Kristos.

The Cyborg Commando has been sent in to retrieve you. Once free, rendezvous with your rescue team to the south. Use them to locate and free Oxanna. She will soon be transported to the main GDI facility, optimal chances for success rely on obtaining her before she is transported. After she has been freed, commandeer a GDI transport to make your escape.

﻿Nod's assault on the research facility turned out to be part of a GDI trap carried out with the collusion of Nod new Forgotten 'allies' and as a result Slavik and Oxanna were captured. They were brought before the GDI commander Michael McNeil and the Forgotten leader Umagon before being taken away to prison. Slavik was then separated from Oxanna as soon as they got to the GDI prison facility in Norway.

Their prison facility was located by CABAL in the wilderness to the south-east of the town of Alta in Norway, 70 miles south of Hammerfest, the GDI's main European base. The facility was made up of a series of 3 moderately guarded prison bases in close proximity which held the prisoners of the GDI. Its remote wilderness location would make it hard for the prisoners to escape, while its proximity to the GDI's heavily defended main European base at Hammerfest would make it harder for the prisoners to be rescued.

But the prison was no longer as secure as it had been. Nod victories in Russia had facilitated the establishment of a Nod military zone on the Finland-Sweden border, centred on Boden in Sweden. It was hoped to one day act as a staging post for an eventual offensive against Hammerfest *but* its establishment also incidentally undermined the security of the GDI prisons where Oxanna and Slavik were being held.

As a result of this CABAL was able to send a team of Nod soldiers across the wilderness of Sweden and Norway in order to release Anton Slavik and Oxanna Kristos from captivity.

﻿Oxanna and Slavik arrived at Boden, Sweden safely aboard the Orca Transport. When they arrived they were likely given a heroes welcome by Nod supporters there due to their many victories against the GDI and against General Hassan. The Swedish Nod command quickly gave them a new Montauk and they made their way swiftly into the Global tunnel system before they could attract any more attention.

But despite their escape they had still failed Kane and they greatly feared his wrath. It was with trembling that they opened a secure channel to Kane and made their apologies to him personally. Much to their relief however Kane quickly forgave them despite their "ignorant mistake" and not only that swiftly gave them yet another high profile mission. 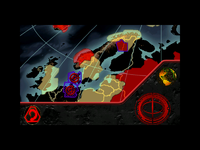 Nod forces were in control of Iceland and stubbornly held on to the mountainous south-west of Norway despite the best efforts of the GDI to dislodge them. Germany and Denmark had been involved in the First Tiberium War, the former on the side of the GDI and the latter on the side of Nod and had both been occupied by the opposing side during the course of that war. Now however as they had little stomach for war and clung to their neutrality, it was now high time for Nod to 'persuade' one of these countries to side with them.

Kane had more ambitious plans for Anton Slavik. Nod would not merely gain control of Germany or Denmark, they would deploy Nod's new tiberium waste missiles there and by so doing devastate GDI positions all over Europe from afar.

Aside from this detail, the choice of which the two nations to focus on was left for Anton Slavik to decide.  Both possessed great strategic value; controlling Denmark would give Nod complete control of the only access route into the Baltic Sea from the Atlantic Ocean and so hamper the deployment the GDI's naval power and Amphibious APCs, while the industry, population, technology and wealth of Germany would greatly strengthen the Nod forces operating in Europe in a material sense.

The decision was Anton Slavik's.