Warthog Hunt (otherwise known as the Attack on Mauritania) is the fifth mission in the Nod campaign of Tiberian Dawn.

Niger, the epicentre of Nod territory in Africa was threatened by the GDI's successful invasion of Nigeria. Kane sent his personal commander to conquer neutral Algeria and by so outmanuevring the GDI in Western Africa he hoped to be able to prevent them from pressing their assault into Niger.

In order to prevent this the GDI relocated A-10 Warthogs from Lagos in Nigeria to airbases in Mauritania. Once there they hoped to bomb Nod forces in Algeria into oblivion and terminate his Algerian offensive. However a sudden rebellion in Mauritania by Nod supporters gave Nod access to Mauritania and it's airfields.

In order to safeguard Nod's offensive in North Africa, Seth delegated a promising Nod commander to invade GDI Mauritania and capture the airbases of the A-10 Warthogs that had been relocated there in order to bomb advancing Nod forces in Algeria.

The force was inserted swiftly into the combat zone through neutral Mali and after defeating minor GDI patrols, managed to assemble the local Mauritanian rebels and establish a base near Tidjikja in Mauritania. While some A-10s pounded this base, the commander managed to set up the SAM sites and eradicate the GDI presence in the region, securing the airfields and thus helping to bring about Nod's takeover of North Africa. 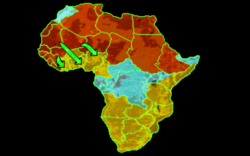 With GDI airpower eliminated the Nod north African offensive successfully drove GDI forces out of much of West Africa.

With the elimination of GDI airbases in Mauritania and the subsequent fall of Algeria, nearly all of North-West Africa fell into Nod hands, securing Niger against any GDI assault and leaving Nod forces free to take over the rest of the continent.