Wave-Force technology was developed by the Empire of the Rising Sun prior to the Third World War. It was used as the basis for a number of munitions. 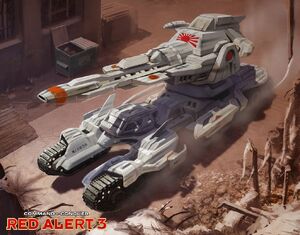 The Wave Force Artillery is a deadly long range unit

Wave-Force devices work by harmonizing the waveforms of heavy particles. The particles resonate as they align and release energy. The energy may be channelled into to produce an energy beam.[1]

Wave-Force was reportedly inspired by an Imperial anthem. The basic technology existed in labs for years before the first practical weapon was developed by Kanegawa Industries.[1]

The phrase "Wave Force", and the characteristics of the Wave Force Artillery, are homages to the Wave-Motion Gun from Space Battleship Yamato.