When Shika Hiromoto, leader of the outspoken Cherry Blossom party and daughter of Vice Admiral Iwao Hiromoto, was found dead in her family's palatial estate in Hyogo Prefecture, the Empire of Japan seemed remarkably unfazed. The nature of the killing--the poisoned dagger, the revenge haiku written on the most delicate rice paper--plainly implied the work of one of the Empire's largest crime syndicates, but subsequent investigations revealed the murder may have been motivated by Hiromoto's opposition to one of the Empire's most-secret weapon systems: the Wave-Force Artillery. This state-of-the-art long-range bombardment technology turned out to be instrumental in the assault on the Soviet heartland, yet was highly controversial. Of course, these details were unearthed only recently, and only after the Wave-Force Artillery was successfully deployed in frontline combat against an unsuspecting and woefully unprepared Soviet border defense. At least now the origin of this strange and catastrophic weapon is better understood. 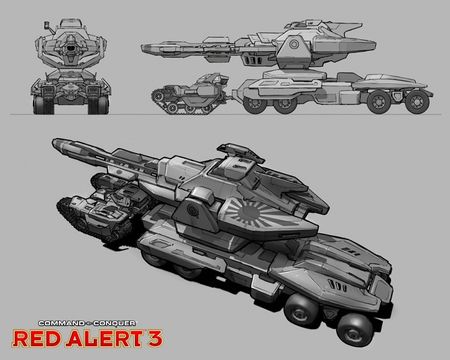 The concentrated power of the Wave-Force particle beam can easily level an enemy structure or obliterate an enemy vehicle.

The result of a competition between two rival weapon manufacturers, the Wave-Force Artillery is in many ways a marvel of technology. Supposedly inspired by the Empire's famous anthem, the Wave-Force uses a powerful generator to harmonize the waveforms of heavy matter particles. As each molecule is aligned, the matter begins to resonate, and soon this closed system takes on tremendous destructive potential. At the moment in which the system's energy can no longer be contained in the supercapacitors, all of it is channeled in a powerful long-range beam, which can tear through most known matter. Chaos and devastation consume all that comes in contact with this beam, yet the effects are so focused and precise that the Wave-Force Artillery can effectively be used to minimize collateral damage if necessary.

This technology supposedly existed in research facilities for years, but engineers at Kanegawa Industries were the first to be able to create a version of the weapon that could effectively operate in the field. The energy weapon requires no bulky ammunition and very infrequent recharging due to a sophisticated energy recovery system. However, the delicate electronics require a nearby clean-room environment and regular maintenance. The intricate filtration system, large power source, and banks of complicated electronics preclude the use of heavy armor in protection of the platform, making the Wave-Force Artillery a powerful, yet vulnerable, weapon. The Empire of the Rising Sun naturally keeps these artillery pieces in the rear ranks, taking care to keep their firing lines clear of friendly forces. 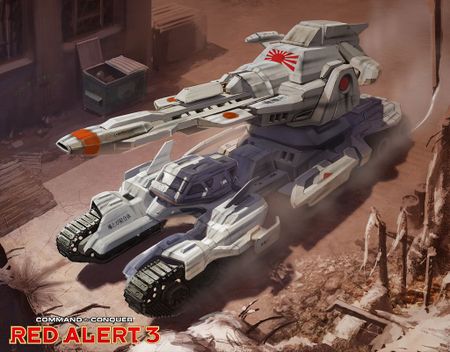 The variable-setting capacitors allow the Wave-Force to fire in rapid low-power bursts, slower very high-power blasts, or anything in between.

The competitor to the Wave-Force Artillery was a more-traditional artillery piece designed by Shirada Shipworks, based on its successful Shogun-class battleship main gun. The Shirada vehicle gained political support after Kanegawa, in an overzealous and politically insensitive moment, referred to its Wave-Force technology as "The Divine Cauldron of Justice". This was blasted as an affront against the Emperor, in the sense that none save the Emperor could arbitrate divine justice against the enemies of the Empire of the Rising Sun. And at this time, Cherry Blossom party leader Shika Hiromoto became a leading voice against the Wave-Force, urging the Empire of the Rising Sun to embrace its traditional roots rather than give in to "the perverse temptations of counter-traditionalism and technological hedonism". In the weeks leading to her assassination, she engaged in a very public, very bitter disagreement with her father, now a high-ranking Kanegawa official, to the embarrassment of the entire Imperial court. Her assassination seemed to cast under the rug a scandalous incident that the Empire needed to move past.

Upon Hiromoto's death, the chief opposition to Kanegawa had lost its voice. At the same time, a string of accidents with the Shirada prototypes, supposedly due to calibration errors, crippled Shirada's effort and soon afterwards the Wave-Force Artillery went into full production--under order from none other than the Emperor's own son the crown prince. Subsequent investigations have implied that the Hiromoto's assassin, and possibly the calibration errors, had ties to Kanegawa, and specifically to the Admiral her father; and, while there is no clear proof, it seems improbable that the events that led to the Imperial military's adoption of the Wave-Force Artillery were coincidence.

And yet for all this, the Wave-Force is unquestionably a successful design and was integral to the Empire of the Rising Sun's ability to push into the Soviet heartland, past long stretches of Tesla Coils previously assumed to be undefeatable. By now, those who once criticized Wave-Force technology as being too exotic or unpredictable would have trouble arguing with its performance record; and those who stand against the Empire pray never be caught within its targeting array.

Battlefield reconnaissance has revealed at least these facts about the Wave-Force Artillery: