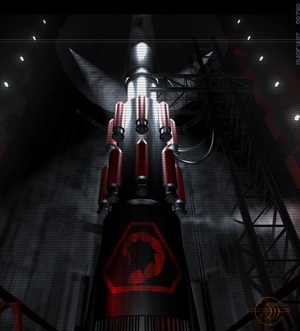 The World Altering Missile developed by Kane in the Second Tiberium War was an ICBM with a warhead of pure, concentrated Tiberium that was designed to detonate in the upper atmosphere of Earth, quickly converting all carbon-based life on Earth to Tiberium-based life. The results of such transformation are unknown, especially due to the fact that the means of transformation greatly differed from regular Tiberium mutation.

The missile was scheduled to be launched from Kane's Nod Pyramid in Cairo. The preparations had already begun, but at the last moment, GDI commander Michael McNeil intervened and destroyed the missile during his assault on Nod forces in the area.

The Nod perspective of the Second Tiberium War was a preview of the WAM's terraforming power, should GDI lose the War. While Kane, in a flash of orange light, vanished from mortal existence, assuming he had achieved Ascension ahead of schedule, the WAM reached the stratosphere and delivered its world-altering payload, turning the Earth into a green world.

It is interesting to take note that when Kane lured Director Boyle into firing the GDI Ion Cannon at Temple Prime during the Third Tiberium War, detonating the Liquid Tiberium Bomb stored within, he finally achieved what he had previously been attempting to accomplish with the WAM in the Second Tiberium War, though on a far smaller scale.