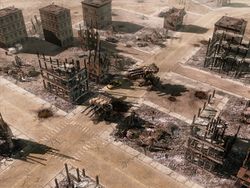 Juggernauts in a decayed urban area.

"Yellow Zones" is a term for a particular region. The Yellow Zones covered approximately 50 percent of Earth's surface by 2047. Most of these areas had suffered from social collapse due to Tiberium infestation, extreme weather changes caused by Tiberium, and decades of war. Despite the worsening conditions, Yellow Zones still held 80 percent of the world's population in 2047. Cities in the most afflicted areas in these zones were run by warlords and criminal organizations or had degenerated into anarchy. Many other areas were controlled by the Brotherhood of Nod, though some cities, particularly those situated in close proximity to the Blue Zones, acted as staging areas and frontline bases for GDI. As a result, conditions in the latter cities tended to be better than those in the "worst off" Yellow Zones. Climatic conditions in Yellow Zone areas near the edges of Red Zones, where Ion Storms would often cross over, were close to uninhabitable. By 2062, Yellow Zones had become the only habitable places on Earth, and even GDI was forced to live within them, since Red Zones had expanded to cover 98 percent of the planet.

The infrastructure of the Yellow Zones tended to be old and decayed, but some areas, such as Rio de Janeiro, were better-off. Many buildings were near collapse and were unfit for habitation. Power and running water were erratic at best; food and medical supplies were scarce. Humanitarian workers, visiting from the pristine and high tech Blue Zones, on a few occasions provided food or medical care.

Due to years of war and strife, the zones were full of abandoned military hardware and crates as well as once important structures, such as EMP Control Centers and Tiberium Spikes, which were abandoned and subsequently used by both factions during the Third Tiberium War.

Most support to the Yellow Zone populations was provided by the members of the Brotherhood of Nod, who provided them with food, health services, education and shelter. As Nod presented Tiberium as a blessing rather than a curse, and worked hard to improve the lives of ordinary people, the general population tended to support Nod rather than GDI. Furthermore, Nod propaganda stated that GDI redrew the international borderlines not based on the level of Tiberium infestation but rather where Nod followers were known to be residing. It was in the Yellow Zones that Nod did most of its recruitment, training and research before the Third Tiberium War.

The harsh reality of Yellow Zone life included more than Tiberium infestation. If Tiberium didn’t kill people, then they were likely to get caught in the crossfire between warlords clashing over turf, or become a collateral damage statistic in the world war between the Global Defense Initiative and the Brotherhood of Nod (as well as between humans and the Scrin when the latter arrived).

After the liquid Tiberium bomb incident in 2047 certain Yellow Zones were transformed into uninhabitable Red Zones. The most famous example of this was the Southeastern European Yellow Zone in the aforementioned incident; another was the obliteration of Bern, the capital of Switzerland, by the Scrin.

By 2062 the small number of Blue zones that survived the Third Tiberium War had been classified as either Red or Yellow Zones. Thus even GDI and Blue Zone citizens were forced to reside within Yellow Zones since Red Zones covered 98% of the planet's surface as Tiberium underwent another evolution that made it resistant to sonic emitter technology.

Kane's unholy alliance with GDI led to the construction of the Tiberium Control Network around the globe. This was successful as the number of Red Zones decreased while Blue and Yellow Zones began multiplying. Unfortunately it was in the Yellow Zones that Nod Separatists conducted their attacks on the TCN nodes and where most of the battles take place. It is likely that when the TCN was activated, the Yellow Zones replaced what remained of the Red Zones, with its conditions slightly improved with the dissipation of Tiberium.