Zone Operations Command (ZOCOM) is a GDI unit that specializes in operating in areas of heavy Tiberium contamination. It is led by C. Elena Renteria, one of GDI's first female generals.

After the apparent destruction of the Brotherhood of Nod following the Second Tiberium War, GDI shifted its focus from war to the abatement and eventual elimination of Tiberium, and the Council of Directors established a new branch of the military specifically tasked with the enforcement and execution of that goal - Zone Operation Command, or ZOCOM. Their peacetime mission was threefold; to improve GDI's military capabilities within areas of high Tiberium infestation, to establish "beachheads" within such areas allowing reclamation to commence, and to protect existing reclamation operations from any attacks, be they terrorist or mutant in origin.

Red zone service is perhaps the most demanding of any GDI assignment, as most soldiers cannot endure significant Tiberium exposure for more than a few weeks at a time without risking serious physical and psychological damage. There are exceptions however - men and women who find the experience of living and fighting in a near alien environment to be an energizing, engaging experience. These individuals quickly find themselves assigned to ZOCOM - and few, if any, would be happy anywhere else.[1]

The initiative that led to the creation of ZOCOM also gave birth to the Mammoth Armored Reclamation Vehicle, a superheavy anti-Tiberium tank capable of single-handedly abating Tiberium in Nod or mutant separatist controlled Red zones.[2]

During the Third Tiberium War, ZOCOM forces began reclamation in the African Red Zone, and deployed a MARV, which destroyed several Nod scout patrols. Fearing that Nod may lose their foothold in Africa, Alexa Kovacs ordered LEGION to stop ZOCOM. LEGION's forces destroyed the MARV, captured ZOCOM's MARV production facility and uploaded the MARV's data, allowing Nod scientists to develop a counter - the Redeemer. ZOCOM sent in two more MARVs, but they were also destroyed, and ZOCOM was driven out of the African Red Zone.[3]

Later in the war, ZOCOM forces escorted a convoy carrying the Tacitus in China, but were once again attacked by LEGION's forces, who attempted to capture the Tacitus. The situation is further complicated by the sudden arrival of Reaper-17 forces, which began attacking both sides. Even though ZOCOM was defeated, Alexa Kovacs intervened at the last minute, cutting off LEGION from his forces and preventing the Tacitus from being evacuated, causing it to fall back into GDI hands. Presumably, ZOCOM reinforcements arrived and recaptured the Tacitus.[4]

After the end of the war, ZOCOM forces were among the GDI forces guarding the Tacitus Containment Facility at the Rocky Mountains Complex. When LEGION attacked the facility in order to finally capture the Tacitus in 2052, they were once again defeated.[5] 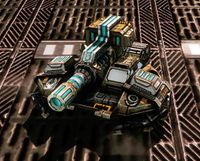 Because of their unique mission, ZOCOM has their own exclusive technologies and units. Most of them are based around their use of harmonic resonance technology. Due to the sensitive nature of their operations, the ZOCOM do not employ Railguns, or deploy Juggernauts in their battles. With the combination of air and ground units, ZOCOM becomes most effective units for All-rounder purpose.

An upgraded version of the Shatterer, and is now capable of firing an extremely powerful sonic blast. This causes devastating damage, but renderers the Zone Shatterer inoperable for several seconds.

Variation of the normal Harvester, armed with rocket launchers instead of the basic anti-infantry gun.

A variant of the Orca Mk. III armed with sonic grenade launchers instead of rockets. Can be upgraded with Ceramic Armor. However it is lot more expensive than its vanilla GDI counterpart, while the attack is also very inaccurate.

Upgrades the armor plating of every aircraft in use by ZOCOM.