After extended operations in Tiberium infested areas, the GDI infantry command commissioned the development of the advanced protective environmental suit. The result was the Zone Troopers, elite infantry units deployed to distant areas in the harshest of conditions.[1]

Their suits were made with a composite armor originally developed for the Mammoth tank, making them impervious against small arms fire. Miniaturized power generators enabled the suit to operate while carrying heavy loads such as anti-tank weapons and oxygen supplies.[1] These suits were fully sealed, protecting them from Tiberium exposure.

Zone Troopers were armed with armor piercing rail-guns that allowed them to engage vehicles and structures while retaining a high level of mobility. This is further enhanced by back-mounted jetpacks which helped them move through rough terrain and obstacles.[1]

Zone troopers are armed with railguns effective against vehicles, but not as effective against infantry. They do not take damage inside Tiberium fields, and their jetpack ability allow them to jump over cliffs and other obstacles.

The sensor pack upgrade allows them to detect stealth units within a limited radius, while the power packs upgrade enhances their durability and allow them to heal automatically. 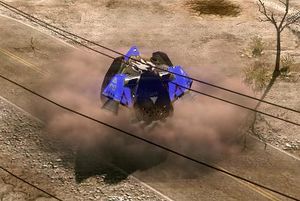 The Zone trooper drop pods support power can be used to summon three veteran Zone trooper squads to the battlefield.

The initial zone trooper design did not have sealed armor. The fanbase complained this did not make sense given the Tiberium-contaminated environment they were supposed to operate in. The final design was sealed, though the original design can still be seen in several cutscenes, most notably the GDI intro.